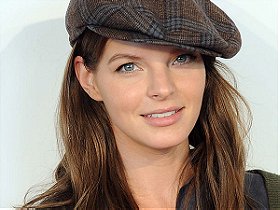 23 votes
Should have known her earlier (189 items)
list by clovia
Published 8 years, 3 months ago

Catterfeld was born in Erfurt, Thuringia in 1979. At the age of 15 she started playing the piano and the flute, simultaneously taking first dance and vocal lessons. After the high school graduation she studied Pop and Jazz at the music academy in Leipzig for two years. In 1998 she eventually released her first recordings under her synonyme KIV, but the seven songs only found little to none professional response.

After her studies Yvonne participated in the singing contest Stimme 2000 (briefly performing under the name Vivianne), where she met manager and later BMG boss Thomas Stein, who offered her a conract with the sub-label Hansa Music. In 2001 she released her first official single, "Bum", a cover of the same-titled All Saints track, but once again the record was not able to enter the charts. At least the following three single "Komm Zurück Zu Mir", "Niemand Sonst" and "Gefühle" helped to expand Catterfeld's popularity.

In 2002 she became part of popular German soap opera Gute Zeiten, schlechte Zeiten, where she portrayed the role of Julia Blum until 2005. Pushed by her TV presence Yvonne finally found big success with her fourth single "Für Dich", which went to #1 of the German, Austrian and Swiss singles charts. Her first album "Meine Welt" saw similar success and was eventually certified Platinum. One year later she was able to reprise this success with "Du Hast Mein Herz Gebrochen" and her sophomore album "Farben Meine Welt".

In fall 2005 Catterfeld became the leading actress in the historical telenovela Sophie - Braut Wider Willen. However, the show never answered the network's expectations and as a result it ended in March after 65 episodes only. At the same time Yvonne released her first single in English language, "Where Does The Love Go", a collaboration with singer Eric Benet. Currently, she's recording her fourth album, which is scheduled for a fall 2006 release date. ... (more) (less)
Tags: German (4), Actress (4), Singer (3), Blue Eyes (2), Born In 1979 (2), Tv Host (1), Born December 1979 (1), GZSZ (1)
My tags:

jemate voted for an image 3 weeks, 5 days ago

congafan voted for an image 4 months, 3 weeks ago

SomeBloke voted for an image 5 months, 3 weeks ago

jemate voted for an image 7 months ago

rasputin68 voted for an image 7 months, 2 weeks ago

franlob voted for 22 images [View All] 7 months, 2 weeks ago

Henny voted for 7 images [View All] 1 year ago

Nusch voted for an image 1 year, 6 months ago

Caroline Beil voted for an image 1 year, 10 months ago

Henny voted for 9 images [View All] 2 years ago

RueBe added this to Rated list 2 years, 3 months ago

clovia added this to a list 2 years, 4 months ago
Should have known her earlier (189 beauty items)

Henny voted for an image 2 years, 8 months ago

Battleax voted for an image 2 years, 10 months ago

OLVIZ voted for an image 3 years, 2 months ago

Ricky F voted for an image 3 years, 5 months ago