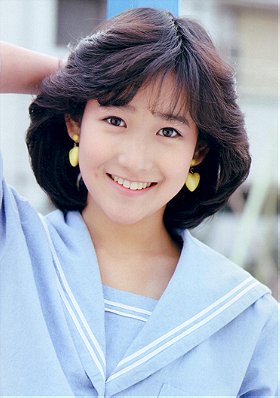 On April 21, 1984, Okada released her first single, "First Date", written by Mariya Takeuchi. She was nicknamed "Yukko" (ユッコ) by her fans, which is a common abbreviation for the name "Yukiko" in the Japanese language.

Okada played the leading role in her first television drama Kinjirareta Mariko (The Forbidden Mariko), in 1985. Her 1986 single "Kuchibiru Network", written by Seiko Matsuda and composed by Ryuichi Sakamoto, reached number one on the Oricon weekly singles chart dated February 10, 1986.

On April 8, 1986, Okada was found with a slashed wrist in her gas-filled Tokyo apartment, crouching in a closet and crying. She was discovered by a rescue team called in by the apartment's manager after other residents noticed the smell of gas. Okada's manager eventually arrived and took her to the nearby Kitano Aoyama Hospital, where her injuries were treated and was brought to the Sun Music Building. While Fudaka, the manager of the building and the staff were discussing how to avoid a media scandal, Okada ran up to the stairs, took off her shoes and jumped from the seven-story building, resulting in instant death. It was 12:15 PM, JST. The reason for the suicide is still unknown, though it has been speculated it was due to Okada wanting a relationship with Tōru Minegishi, who had previously rejected her. This is due to Okada saying "I thought of someone" when replying to why she tried to kill herself at her apartment and to her manager discovering notes written by Okada describing her longing to be with Minegishi. Some of these notes ended with: "I wanted to see him again" and "My heart has nowhere else to go."

Her fans were shocked and shattered by her untimely death. It resulted in many copycat suicides in Japan, soon christened with the neologism "Yukko Syndrome." Okada was cremated and her remains were interred in a family vault at a Buddhist temple in Jōman-ji, Nagoya, Japan. ... (more) (less)
Tags: Suicide (1), Japanese (1), Asian (1), Female (1), Singer (1), Idol (1), Die Young (1), Died At 18 (1)
My tags: