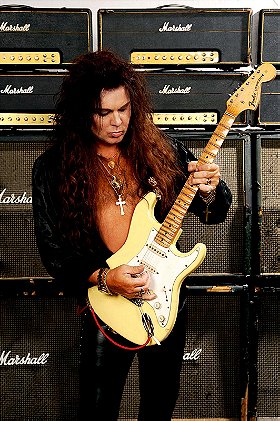 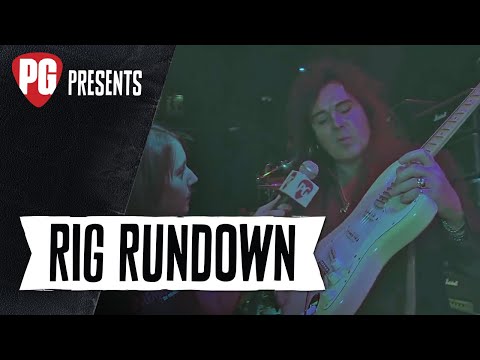 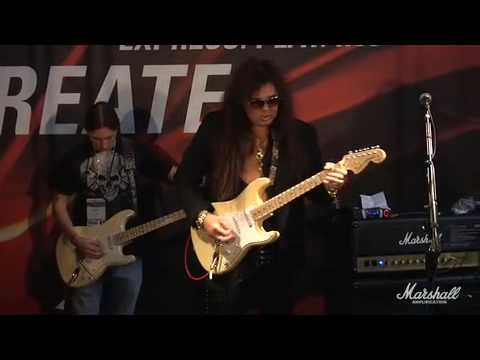 Born into a musical family in Stockholm, Yngwie was the youngest child in the family. At an early age, he showed little interest in music. It wasn’t until September 18, 1970 when at age seven he saw a TV special on the death of Jimi Hendrix that Malmsteen became obsessed with the guitar. To quote his official website, “The day Jimi Hendrix died, the guitar-playing Yngwie was born”.

Malmsteen was in his teens when he first encountered the music of the 19th-century violin virtuoso Niccolo Paganini, whom he cites as his biggest classical influence. It has been rumoured that Yngwie believes himself to be the reincarnation of the temperamental, often criticized, and widely misunderstood violinist from Genoa. Through his emulation of Paganini concerto pieces on guitar, Malmsteen developed a prodigious technical fluency. Malmsteen also cites Jimi Hendrix, Genesis, Uli Jon Roth, and Deep Purple as influences.

Malmsteen’s contributions to the evolution of modern rock guitar, particularly his embracing of modal progressions and classically-influenced techniques not widely used in rock music, broke new ground and Malmsteen is often credited with the creation of the neoclassical metal genre, inspiring a new generation of virtuoso electric guitarists including Paul Gilbert and Tony MacAlpine.

In late 1982 Malmsteen was brought to the USA by Mike Varney of Shrapnel Records, who had heard a demo tape of Malmsteen’s playing. Shrapnel is synonymous with the shred style of music. He had brief engagements with Steeler, for their self-titled album of 1983, then Alcatrazz, for their 1983 debut No Parole From Rock N’ Roll, and the 1984 live album Live Sentence. He left Alcatrazz in 1984, replaced by Steve Vai, and began his solo career.

Malmsteen released his first solo album “Rising Force” (winner of Guitar Player Magazine’s Best Rock Album and nominated for a 1984 Grammy for Best Rock Instrumental) which achieved #60 on the Billboard album chart. He was nominated for a Grammy and later Rising Force topped the charts at number 1. This was followed by “Marching Out” (1985). Jeff Scott Soto was the singer in the first two albums.

His third album, Trilogy, was released in 1986. In 1987, former Rainbow vocalist Joe Lynn Turner joined his band. That year, Malmsteen was in a serious car accident, smashing his Jaguar XKE into a tree and putting him in a coma for a week. Nerve damage to his right hand was reported. It was during his time in the hospital that Malmsteen’s mother died from cancer.

In the summer of 1988 he released his fourth album, Odyssey. Odyssey would be his biggest hit album, mainly because of its first single “Heaven Tonight”. Shows in Russia during the Odyssey tour were recorded, and released in 1989 as his fifth album Trial By Fire: Live in Leningrad. The concert in Leningrad was the largest ever by a western artist in the Soviet Union, and Malmsteen’s record sales in Russia totalled 27 million.

In late 1988, his signature series Fender Stratocaster was released, making him the second artist so honored, after Eric Clapton.

Malmsteen’s style “Neo-classical” became somewhat popular during the mid 1980s, with notable contemporaries such as Paul Gilbert, Marty Friedman, Tony MacAlpine and Vinnie Moore all reaching prominence after Yngwie. However, only Paul Gilbert claimed Yngwie as an influence, with MacAlpine coming to the neoclassical/shred field by applying his classical piano training to his guitar playing and Moore arriving at a similar style because he shared Yngwie’s major influences, Ritchie Blackmore of Deep Purple and Al Di Meola, American jazz fusion great of Return to Forever fame.

Despite his early success, and continuous success in Europe and Asia, by the early 1990s the gratuitous over-the-top stylings of 1980s heavy metal had become unfashionable in the USA. This was displaced by the Seattle grunge movement, where technical ability was replaced by simpler, more emotionally-driven songs. The grunge rock movement may have arisen in part as a backlash to the overly technical metal inspired by Malmsteen and his contemporaries, which despite its often impressive technique was regarded by many as ponderous, bland and self-indulgent.

In the 1990s, Malmsteen continued to record and release albums under the Japanese record label Pony Canyon, and maintained a devoted following in Europe and Japan, and to a lesser extent in the USA. In 2000, he once again acquired a contract with a US record label, Spitfire, and released his 1990s catalog into the US market for the first time, including what he regards as his masterpiece Concerto Suite for Electric Guitar and Orchestra, recorded with the Czech Philharmonic Orchestra in Prague.

After the release of War to End All Wars in 2000, singer Mark Boals left the band. Yngwie went on tour with former Ark vocalist Jorn Lande. Due to various tensions on tour, Jorn left before the recording of Yngwie’s next album, Attack!!. He was replaced by former Rainbow vocalist Doogie White. White’s vocals were well received by fans, and it seems that he has become a permanent member of the band.

In 2003, Malmsteen joined Joe Satriani and Steve Vai, with whom he toured as part of the G3 supergroup.

Yngwie released Unleash the Fury in 2005. ‘As stated in an issue of “Guitar World” magazine, he titled this album after the infamous ‘airline incident’, which occurred in a flight to Japan for the ‘Odyssey’ tour. He was drunk and was behaving obnoxiously, until he fell asleep and was roused by a woman dumping water on him. Enraged, he shouted, “You stupid bitch! You’ve unleashed the fockin fury!” The audio from this moment was caught on tape by a fellow band member.

He is married to April and has a son named Antonio after Antonio Vivaldi. A noted Ferrari enthusiast, he owns a black 1985 308 GTS[1] and a red 1962 250 GTO.[2] In recent years, Yngwie has given up both smoking and drinking. The Malmsteen family lives in Miami.

Aside from technical prowess, distinctions of Malmsteen’s guitar style include a wide, violin-like vibrato inspired by classical violinists, and use of such minor scales as the Harmonic minor, and minor modes such as Phrygian, and Aeolian. Malmsteen cites the Fender Stratocaster and the single coil pickups (of which he uses his custom design by DiMarzio, which are actually a vertically-stacked humbucker mounted in a single coil housing Malmsteen sought to combine the tone of a single coil with the reduced noise of a humbucker) as being instrumental to his unique tone. The Malmsteen signature model Stratocaster made by Fender is based accurately upon this combination.

The guitars he uses are recognizable by the addition of a custom scalloped fretboard. This is similar to a regular fretboard, but with wood ‘scalloped’ or scooped away to form a concave shape in between the frets. Malmsteen allegedly conceived this design as a teenager while working in a music store in Stockholm, Sweden when he came across a 17th century lute with a scalloped neck using the raised wood as frets. However, this can also be viewed as an influence from Ritchie Blackmore, one of his most readily admitted idols, who also favors scalloped neck Fender Stratocasters. Malmsteen himself has said he learned most from Ritchie Blackmore’s guitar riffs and solos as a beginning guitarist. Also, jazz-fusion guitarist John McLaughlin used scalloped fingerboards long before Malmsteen came on the scene.

Even for the experienced guitar player, the scalloped fingerboard proves very difficult to perform on, as there is no surface contact between finger and wood to aid in the feel of the vibrato motion. The strings of the guitar, when fretted, are easily pushed sharp and out of tune. The highly accurate, delicate yet controlled touch required to play properly with Malmsteen’s modified Stratocaster is elusive for most, and an integral part of Malmsteen’s technique.

Mass. Patriot voted for an image 5 months ago

Campagnola voted for an image 7 months, 2 weeks ago

lovedriver voted for 4 images 11 months ago