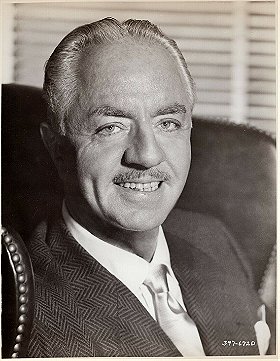 48 votes
Tribute to the Dinosaurs of the Cinema (122 items)
list by xolmis
Published 8 years, 3 months ago

3 votes
View all William Powell pictures
Description: William Horatio Powell (July 29, 1892 – March 5, 1984) was an American actor. A major star at Metro-Goldwyn-Mayer, he was paired with Myrna Loy in 14 films, including the popular Thin Man series based on the novels of Dashiell Hammett in which Powell and Loy played Nick and Nora Charles, as well as Manhattan Melodrama opposite Clark Gable. He was nominated for the Academy Award for Best Actor three times: for The Thin Man (1934), My Man Godfrey (1936), and Life with Father (1947). William Powell was not related to David Powell, Dick Powell, Eleanor Powell, or Jane Powell. William Horatio Powell (July 29, 1892 – March 5, 1984) was an American actor.

5. After the Thin Man
View all William Powell movies (86 more)

3. After the Thin Man

5. The Baroness and the Butler
View all William Powell movies (86 more)

Leo added this to a list 14 hours, 42 minutes ago
Actors with Most Oscar Nominations But Zero Wins (142 person items)

giannicorso73 voted for an image 5 years, 4 months ago

Dark Warrior added this to a list 6 years, 7 months ago