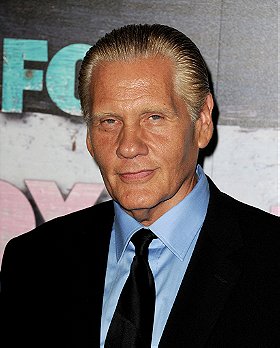 The energetic Forsythe portrayed comic book villain "Flattop" in Dick Tracy (1990), was foolish enough to tangle with vengeful cop Steven Seagal in the hyper-violent Out for Justice (1991) and locked horns with ex-NFL linebacker Brian Bosworth in the biker action film Stone Cold (1991). With his expertise in playing icy villains, Forsythe was perfect to portray Prohibition mobster Al Capone in the short-lived '90s revival of the classic '60s crime show, The Untouchables (1993), and he continued the motif of playing edgy, nefarious individuals in the thought-provoking The Waterdance (1992), the oily film noir piece Things to Do in Denver When You're Dead (1995), as real-life mobster Sammy Gravano, aka "The Bull", in Gotti (1996) and supporting another ex-NFL player's foray into film acting, when L.A. Raider Howie Long debuted in Firestorm (1998).

Exclusive added this to a list 1 month, 3 weeks ago

" as Richie Madano in Out for Justice"

Leo added this to a list 5 months, 2 weeks ago

Actors With Most We Hate Movies Appearances (409 person items)

Queen of Horror added this to a list 2 years, 2 months ago

Leo added this to a list 3 years, 3 months ago

How Did This Get Made All-Stars (197 person items)

milica added this to a list 4 years, 5 months ago

Leo added this to a list 4 years, 9 months ago

"City by the Sea"