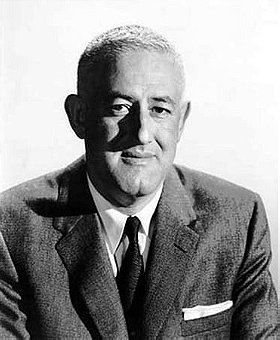 He purchased the film rights to Ira Levin's novel "Rosemary's Baby", but Paramount Pictures would give him the green light for the project only if he didn't direct--the studio feared that his reputation as a director of low-budget gimmick horror films would harm the project. Roman Polanski was finally selected to direct while Castle, as producer, was allowed to make a significant cameo appearance.

He emulated Alfred Hitchcock. This included the practice of appearing in the trailers, and even making cameo appearances in his films. He went so far as to create a trademark silhouette that showed him in a director's chair and in profile with a cigar. Hitchcock noticed the big grosses for Castle's low-budget House on Haunted Hill (1959), which led him to return the "favor" by taking a page from Castle and creating his own low-budget thriller--Psycho (1960).

He began his career as an actor on Broadway at the age of 15. He reportedly got his first role by passing himself off as the nephew of Samuel Goldwyn.

He began his directing career at the age of 18 with a stage production of "Dracula."

His daughter Terry Castle co-produced and consulted on the remakes of two of his films to make the plot even more frightening: House on Haunted Hill (1999) and Thir13en Ghosts (2001).

John Goodman's character in Matinee (1993) was based on Castle.

Worked as a dialogue director for Columbia in the 40s.

2. Man with a Camera

4. The Court of Last Resort

2. Man with a Camera

5. The Court of Last Resort
View all William Castle TV

1. Step Right Up!: I'm Gonna Scare the Pants off America

1. Step Right Up!: I'm Gonna Scare the Pants off America

samira voted for an image 1 month, 1 week ago

moviebuff added this to a list 6 years, 1 month ago
Most Influential Filmmakers (47 person items)