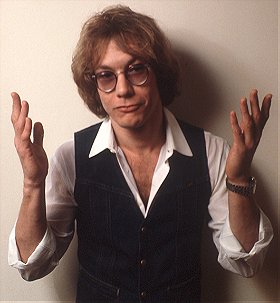 He was born to a Russian Jewish father and a Mormon mother and soon moved to California. At the age of 12/13, Warren Zevon was a regular visitor to the home of Igor Stravinsky where he, along with Robert Craft, would study music.

He turned to a musical career early, including a stretch as part of a Sonny and Cher-type male/female duo called Lyme and Cybelle, and spent time as a session musician (notably as piano player for the Everly Brothers) and jingle composer. He wrote several songs for his White Whale label-mates the Turtles, though his participation in their recording is unknown. Another early composition (“She Quit Me”) was included in the soundtrack for Midnight Cowboy, released in 1969. His first attempt at a solo album, Wanted Dead or Alive (1969), did not fare well, and his second effort, Leaf in the Wind, was scrapped (though release was considered just prior to his death). In the early 70s he toured regularly with the Everly Brothers as keyboard player and band leader/musical coordinator. His dissatisfaction with his career and the opportunities for a song-writer led him to move to Spain briefly, where he played in a small bar owned by a former mercenary. Together, they penned Zevon’s classic “Roland the Headless Thompson Gunner.”

In the mid-70s he moved to Los Angeles, and became associated with the then-burgeoning West coast music scene, including collaborations with Jackson Browne, who would produce and promote Zevon’s self-titled major-label debut in 1976, The Eagles, who appeared on that first album, and Linda Ronstadt, who would record several early Zevon songs including a hit version of “Poor Poor Pitiful Me”. Zevon’s first tour in 1977 included guest appearances in the middle of Jackson Browne concerts.

In 1978 Zevon released his breakthrough album, Excitable Boy, to critical acclaim and popular success. Several tracks from this album received heavy FM airplay and the single release “Werewolves of London”, which featured a relatively lighthearted version of Zevon’s signature macabre outlook, was a top-ten hit.

For the next 20 years Zevon would continue to record and release albums sporadically and with varying levels of success, while fighting personal demons including an acknowledged battle with alcoholism and drugs. (His fourth album, Bad Luck Streak in Dancing School is dedicated to novelist Ross Macdonald, who crucially assisted Zevon during a particularly difficult episode in 1979.) Apparently success did not treat Zevon well, as evidenced by his movements (living on Philadelphia’s Rittenhouse Square, etc.), well-documented stints in rehab, and withdrawal from the spotlight. After the release of The Envoy in 1982, Zevon effectively quit his career as a full-time occupation, appearing rarely and usually solo, without a band. He also collaborated with several members of R.E.M. to record as the Hindu Love Gods in 1990, though initial collaboration occurred during his “lost period” in 1984.

In 1987 Zevon made a comeback with a modest hit album Sentimental Hygiene, which featured collaborations with Neil Young, Bob Dylan, and members of R.E.M., among others including long-time collaborators Jorge Calderone and Waddy Wachtel. The follow-up album, Transverse City in 1989 also featured guests, including Jerry Garcia and David Gilmour. The tradition of collaborations with more famous musical talents was consistent throughout his career, from the appearance of Jackson Browne and The Eagles on his first album, to Bruce Springsteen on his last.

Zevon toured the US regularly during the 90s, often alone, with minimal accompaniment. He did conduct a tour with Odds, a band from Vancouver, Canada. Many tours started in Colorado to allow Warren an opportunity to visit with his long-time friend, Hunter S. Thompson. Warren was close to several prominent writers who also collaborated on song-writing, including Carl Hiassen. He also served as musical coordinator for an ad-hoc group called the Rock Bottom Remainders, a collection of writers performing rock and roll standards at book fairs and other events. This group included Stephen King, Dave Barry, and other popular writers.

In interviews, Zevon described a lifelong phobia of doctors and seldom received medical assessment. In 2002, after a long period of untreated illness and pain, Zevon was encouraged by his dentist to see a doctor; when he did so he was diagnosed with inoperable mesothelioma (a form of lung cancer associated with exposure to asbestos rather than smoking). He then began recording his final album, The Wind, with guest appearances from close friends including Bruce Springsteen, Don Henley, Timothy B. Schmit, Joe Walsh, David Lindley, Billy Bob Thornton, Emmylou Harris, Tom Petty and others.

On October 30, 2002, Zevon was featured on the Late Show with David Letterman as the only guest for the entire hour. Zevon performed several songs and spoke at length about his illness. Zevon was a frequent guest and occasional substitute bandleader on Letterman’s television shows since Late Night first aired in 1982. It was this show where Zevon offered his insight on facing death: “enjoy every sandwich.”

Zevon previously stated that his illness was expected to be terminal within months after the diagnosis in the Fall of 2002; however he lived to see the birth of twin grandsons in June of 2003 and the release of The Wind on August 28, 2003. When his diagnosis became public, he told the media that he just hoped to live long enough to see the next James Bond movie, a goal he also accomplished. Appropriately, the film was called Die Another Day.

Zevon died at his home in Los Angeles, California, on September 7, 2003. The Wind was certified gold by the RIAA in December of 2003 and Zevon received 5 posthumous Grammy nominations, including Song Of The Year for “Keep Me In Your Heart”.

A tribute album titled Enjoy Every Sandwich: Songs of Warren Zevon was released October 19, 2004. His son, Jordan Zevon, did a large part of the work on the album and performed “Studebaker,” a previously unreleased composition. A second tribute album, titled Hurry Home Early: the Songs of Warren Zevon (the lyrics “hurry home early” are from the song “Boom Boom Mancini,” on Sentimental Hygiene) was released by Wampus Multimedia on July 8, 2005.

On February 14, 2006, VH1 Classic premiered a video from a new compilation, “Reconsider Me: The Love Songs of Warren Zevon.” The video, titled “She’s Too Good For Me,” aired every hour on the hour throughout the day. The video was not well received among many of Zevon’s fans, as evidenced by their responses on the official Bulletin Board. ... (more) (less)
Tags: OCD (1), Died 2003 (1), Born 1947 (1)
My tags:

patvyn added this to a list 3 years, 2 months ago
my favorite vocalists (10 music items)

patvyn added this to a list 3 years, 8 months ago
my favorite musicians / bands (10 music items)