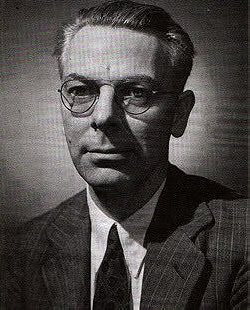 Gibson graduated from Colgate University in 1920 where he was a brother of Delta Kappa Epsilon, and began working "for newspapers in his native Philadelphia as a reporter and crossword-puzzle writer,"[1] specifically for the Philadelphia North American, and later The Evening Ledger. In 1928 Gibson was asked by Macfadden Publications to edit True Strange Stories; he did, for a time, identified as Walter Scofield, commuting back and forth to New York.[2][3] In 1931, after submitting some crime stories for Detective Story Magazine, he was asked by publishers Street & Smith to produce the first print adventure of The Shadow, who at that stage was merely a voice, the mysterious narrator of the Street & Smith-sponsored Detective Stories radio drama.[1] It was Gibson who created all the mythos and characterization of The Shadow, including his alter ego of wealthy playboy Lamont Cranston.

Gibson wrote more than a hundred books on magic, psychic phenomena, true crime, mysteries, rope knots, yoga, hypnotism, and games. He served as a ghost writer for books on magic and spiritualism by Harry Houdini,[1] Howard Thurston, Harry Blackstone, Sr., and Joseph Dunninger.[5] Gibson wrote the comic books and radio drama Blackstone, the Magic Detective. starring a fictionalized version of Harry Blackstone. Gibson also introduced the famous "Chinese linking rings" trick in America, and invented the "Nickels to Dimes" trick that is still sold in magic stores to this day. He "wrote extensively on Houdini and his escape tricks and sleight-of-hand,"[1] and became involved after Houdini's death with Houdini seances. Houdini was known as much for his investigations into — and exposure of — false mediums, and after his death, his wife Bess held seances for ten years in an attempt to contact the deceased magician. She then passed this role on to Gibson, who for many years helped preside over the Houdini Seances in the 1970's and 1980's at New York's famous Magic Towne House with such well-known magicians as Milbourne Christopher, Dorothy Dietrich, Bobby Baxter, and Dick Brooks. Before Gibson died, he passed on the responsibility of doing the Houdini Seances to Dorothy Dietrich, currently of The Houdini Museum in Scranton, Pennsylvania. ... (more) (less)
Tags: Ghost Writer (1), Magician (1), Prolific Writer (1), The Shadow (1), Writer (1), Author (1), Pulp (1), Pulps (1)
My tags: