The Colour of Magic Review. 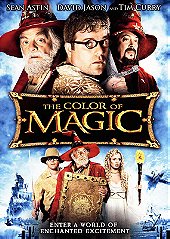 This TV-film incorporates Pratchett's first two books, 'The Colour of Magic' and 'The Light Fantastic'. Let me start by saying; I thought it was wonderful.

It kept to the books very well and had a shocking array of famous faces; anything with Tim Curry, Jeremy Irons and David Jason has to be great. I've not seen any new material from Tim Curry in a while, and was pleased to see, he hasn’t lost his touch. His trademark smirks and villainous nature; made my day.

After having one of the 8 great spells jump into his mind, failed Wizard Rincewind (Jason) begins a trek across the disc with it's first ever tourist. Meanwhile, the disc is unexplainably hurtling towards a star.

The whole thing felt quaint and British; and I love things that feel like this. Like a tea house, or a chivalrous man. You can tell however that the whole thing was bankrolled by our good friends across the pond; the special effects were great and the costumes and sets were detailed and professional (see image below). In particular the scene where the disc finally meets the star; is visually stunning.

As with many adaptations, the story itself is the hook. The whole thing has a professional feel about it, that English television rarely sees. A plot written by a professional author and acted by some of the most talented and genius actors in the business. The star acts as a constant looming threat of total annihilation; despite this ‘The Colour of Magic’ is light hearted, tongue-in-cheek and feel-good throughout. This ‘mini movie’ breaks many of the conventions of fantasy cinema. If you want a usual fantasy epic, with a roller coaster ride of emotions; this isn’t what you want. Some of you may find the convention break unsettling, others will find it refreshing. I know some people wont like this, I cannot recommend it across the board. In my humble opinion though, its so very good.

The Places by Kaa

Actors/People I find attractive by Alicia

Over Forty and Still Fine by kinkykite

I'm not a monster.// by Einat Hellsing

The Evolution of Jason Segel by Daniela