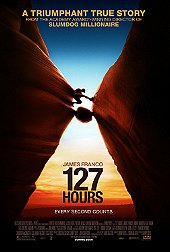 Liked:
- The stunning scenery of the Canyonlands National Park and the color palette: this vivid contrast between bright blue sky and red burned ground.
- The jumping into the cave pool scene.
- The whole wrist amputation scene, especially Franco's shocked face right after he released himself. His face was clearly reading that he couldn't believe he's finally free. I've expected to see more close-ups of the process, but it was still very thrilling.

Didn't like:
- One of his video logs where he's imitating a talk-show or something. His rather awkward acting as a talk-show host reminded me of his dull co-hosting the Academy Awards show. The other video logs were OK.
- The little boy in one of Franco's hallucinations. He was creepy standing there behind the rock, staring indifferently at his future dad's desperately trying to free himself...

The overall impression:
The movie is beautifully done. I was very attached to the main character, empathizing with him, with all my heart wishing him to be rescued. The narration is tense and easy at the same time, and never let go of my attention. It is a good depiction of a man slowly going crazy in an extreme situation. However, the movie wasn't as inspirational as the story itself. Perhaps, it might be better if they included more of a real Aron Ralston at the end, more of him showing how he's dealing with his right wrist missing, not just him sitting on a couch. Franco's performance was excellent - very natural and believable - but clearly doesn't deserve an Oscar.

My recommendation:
Strongly recommended, unless you have a weak stomach ;D