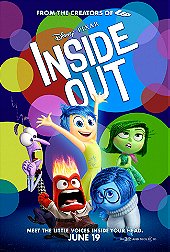 Pixar Animation Studios appeared to have gone off the radar for a while having not released a film since Monsters University in summer 2013. Instead, they have been working on two new original projects for 2015, one of which being Inside Out. Being Pixar’s 15th feature and their 11th original story, Inside Out could be their strangest yet most fascinating picture to date. It embarks us on an adventure about aspects that are seen in practically every film (feelings), but within lays the manufacturing of those feelings and contending of how they can be controlled. In this respect, the concept of Inside Out is central to all Pixar characters and their complex phases of childhood, adolescence, parenthood, grief, identity and self-discovery. The film allows us to explore our own imaginations (which have always been Pixar’s speciality) within not so much a fictional world, but about life itself and how it is manifested through the actions we take through feelings. Inside Out may sound obscure on paper, especially for kids, but the on-screen execution elicits a both entertaining and educational value for all audiences alike.

Inside Out follows a very similar structure to many Disney films - characters develop, situation is perfect, something goes wrong and then the goal is to restore it (Frozen being a recent example). However, instead of it being that straightforward, Inside Out is a narrative parallel that combines both fantasy and reality in its connotations of the fantasy-adventure inside Riley’s mind and the family-drama regarding Riley’s life and her circumstances. The film’s co-director Pete Docter has demonstrated this before with Up in 2009, only this time providing us a story that, in many ways, holds a piece of every Pixar film. Everyone has feelings and Docter’s story helps us understand the basic yet most relatable concept of what could be inside the other characters’ minds as well as our own as viewers. For example, the functions inside Riley’s mind that concern her memories and emotions, such as the Islands of Personality and Memory Dump are easy to understand for all audiences. Also the fact that Riley’s memories, including her core ones and emotional reactions within her mind function through technology further elicits a more relatable standpoint towards contemporary viewers. Nevertheless, the complexities of how feelings are constructed are portrayed as an educational concept for kids to understand but the humane execution through these emotions is significant for adults to appreciate.

The film’s central tagline already states – “what if feelings have feelings?”, and Inside Out’s feelings are actually protagonists themselves but in a human form. All five central emotions are humanised and each represent a social identity - Joy as a maternal figure in her 30s, Disgust as an 18-25 year old woman, Fear as a teenage geek, Anger as a washed-up middle-aged man and Sadness as an aging pensioner. This is substantial to the majority of voice performers, notably Amy Poehler as Joy and Phyllis Smith as Sadness. In fact, these characters match their voice performers, or at least their star personae. They each play a significant role within Riley’s life and both their separation and connections convey how we as human beings maintain conscious thoughts and control the actions we take in life. Their collaboration and involvement in the narrative resembles other great Pixar groups including the toys (Toy Story), rats (Ratatouille), dogs (Up) and the sea underworld (Finding Nemo). 11-year-old Riley is also a protagonist on an equal level to the five central emotions. As we see the five feelings running inside Riley’s mind, it may allow viewers to imagine further of the thoughts within other Pixar children’s and exploring their horizons; i.e. Andy & Bonnie (Toy Story), Boo (Monsters Inc), Dash, Violet and Jack-Jack (The Incredibles), Russell (Up) and Merida (Brave). Emotions are central to an audience’s imagination, but Pixar exploring it through children, specifically Riley, reflects a genuine and sophisticated interpretation. Inside Out examines phases of childhood and adolescence only to interpret through these emotions that feelings are central to showing our true selves, and in her difficult circumstances, Riley shows her emotional downpour and her emotional strength as the narrative progresses. Interestingly, we get a glimpse of inside other characters’ minds, primarily Riley’s parents, and understand a child-friendly interpretation of adulthood. Within scenes that feature the parents’ minds, Pixar pays great attention to detail of adulthood and social identity from their own Anger, Disgust, Fear, Joy and Sadness, such as facial hair, lipstick and glasses that connect them to the actual individual. Interestingly, though, Inside Out does not feature an actual antagonist and because feelings and life situations are the story’s central premise, the obstacles of Riley’s new life in San Francisco is considered the villain.

Pixar’s Inside Out is a magnificent triumph in both its entertaining and educational values. It may be considered their most unorthodox picture to date as it does not entail a fantasy-adventure concept or have a strong emphasis on humour, but Inside Out is central to all Pixar films and one which, other than the obvious Easter Eggs or the mind-blowing Pixar Theory, connects them all together. 2015 is a very opportunistic year for Pixar with its two feature releases (Inside Out and The Good Dinosaur in November), but it is 20 years since the release of Toy Story. Inside Out touches upon many emotional, thematic elements, specifically in relation to life itself (like Toy Story and Pete Docter’s previous film Up). In summary, Inside Out is an extraordinary but heartfelt journey that returns to Pixar’s Golden Age once more and in its 20th year of feature filmmaking; it is a celebration of Pixar’s past achievements and is a significant reminder of what may be in store for the future.