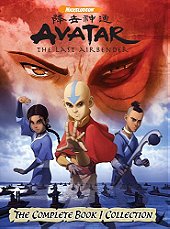 Nickelodeon went out on a limb when they added this show to their Nicktoons line-up, and luckily for them Avatar is the most respectable, well made cartoon they have ever featured.

When this show first came out when I was in 4th grade back in 2004, I watched the first season religiously. I barely got into the second season because by the time it was released it was suddenly "uncool" to watch cartoons. A few weeks ago, for nostalgia's sake, I picked up the first season to relive my old favorite show. I wasn't expecting much going into it, but I was absorbed by just the second episode. I think I watched the entire season in one day, and bought the other two seasons the next day. OCD is a magnificent thing.

At first I was cautious because I am *NOT* a fantasy-lover. I admit that I usually have trouble enjoying shows with anything fantastic or spiritual, such as, say... flying bison or magic/spiritual water. But I put my hang-ups aside and enjoyed it to the full.


THE GOOD:
The animation is beautifully done for a television budget and the backgrounds deserve special attention for their beauty and detail. From small documentaries and extras, I admire the research done to make the show authentic, from the locations to the caligraphy and especially to the martial arts. True to the idea of bending, the character's movements correspond to the way they move their element, which is easy to see in the animation which flows like water (no pun intended).

The show is legitimately funny and quirky. I was surprised to find no hints of any hidden adult humor, (because those are usually what I find funny in cartoons). The show is good-natured throughout and just generally has a good heart about it.

The characters develop into interesting, three-dimensional personalities with contradictions and hang-ups, occasionally acting wrongly because of their young age or strong emotions. The story contains its fair amount of filler, but it is usually not tiring and advances the plot in some way. And when the plot really gets moving, it's engrossing and exciting.

While it is entertaining for kids, the story is mature and intelligent enough for adults to enjoy, but simple enough for the young ones to understand.

I of course cannot leave out the soundtrack. Comprised mostly of taiko drums, traditional Chinese instruments, western orchesteral instruments and chanting, the music is dynamic, exciting and downright beautiful. While the orchesteral music is unique enough to include in a children's cartoon, the soundtrack is always expressive, imaginative and unique in itself. I hope for an original soundtrack, because I would love to listen to it in my free time.

All in all I am so impressed at the extraordinary effort put into this show. The sheer amount of work and pride the creators have is present in every scene.

Here's the part where I nit-pick.

Because of the intended audience (6-11 year olds) I was more willing to dismiss the times when things got a tad far-fetched. Firmly logic based people like me may feel that some of the ideas or spirituality expressed are silly, but I just told myself "you just saw a magical kid flying on a bison" and I shake it off.

Some scenes had moments bordering on melodramatic, but it only ruined the effect for a few seconds before I was engrossed again.

Like I mentioned, there is filler. I know some people are really bothered by filler, and understandably so. I've never really cared, personally. There are a few moments that really irked me and I desperately wanted the story to continue (like when Appa gets kidnapped in the desert). Most of the filler advances the story in one way or another, though.

In some of the action sequences the director chose one long shot, which showed some characters just standing in the background not doing anything, distracting from the scene. This improved over the series when the director learned to do several close shots of the action rather than panning and exposing the entire battlefield to reveal all the gaps.

But these are all such small things that I usually didn't notice much.