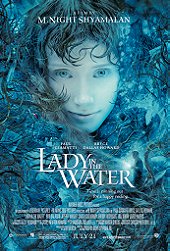 Being a big fan of fairy tales, especially their relevance to our modern lives, I thought that the perfect film for me had come into existence.

At a rundown apartment complex a mundane, bored with life handy man stumbles across a water nymph trying to save humanity from its own ignorance.
After convincing him she is more than just a nut job he attempts to get her back home, which simultaneously would also save our world.

During what turns out to be a mammoth struggle, the rest of the complex also becomes engaged in the fight. Each finding they have a specific talent and gift to offer up for the cause. The characters end up saving each others lives both literally and in terms of future purpose, thus becoming all the better for it...

Unfortunately I think M. Night Shyamalan just tried to combine too many elements into this film. The comedy falls short at every point, the magic just never comes alive and the characters, which are purposely subscribed to the traditional fairy tale roles fail to come into their own, leaving me uninspired and compassionless.
What really makes me feel sad, is that you get such a sense of Shyamalan's ego. Thinking he has done a wonderous and origional piece of cinema. I mean, who charades as the Jesus-esque saviour in their very own film!

By the end of the film I felt like it would have been better if the housing complex had of been killed off by the mythological, nymph eating ‘Snark’ taking humanity with it, thus ending my misery and bitter disappointment of having to sit through the rest of the film.