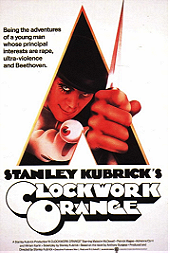 Kubrick was a master of the controversial. When Clockwork came out, mass hysteria ensued, bannings off the film took place left, right and centre; it was even banned in areas that didn’t have cinemas.

Naturally themes such as rape, violence and youth gangs are going to be demonised; what is really scary about this film however, is how Kubrick finds a way to glorify them. Despite his actions, Alex DeLarge is still in essence a likeable character. McDowell plays Alex in a innocent and childlike manner that starkly contrasts his highly sexed and violent lifestyle.

This film is work of an auteur, every part of it is a feast for the senses. Seductive statues, sweeping architecture, colour and patterns are everywhere. Rather than the piano, harsh electronic instruments are used to play classical tunes; creating an air of uncertainty and malevolence throughout.

Very few films are able to stir such levels of depravity; and for that reason alone, Clockwork is nothing short of a masterpiece.

My favorite Guitar Players by kelevra777