A fresh and fun spin-off prequel. 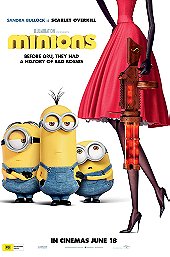 Out of all the most beloved supporting characters in children’s film franchises from Puss in Boots in Shrek to the Penguins in Madagascar, perhaps none deserve their own feature film quite like the Minions in Despicable Me. The beloved yellow, dungaree-wearing creatures played a huge part in those two films, mainly due to their humorous nature and unique appearances for children to enjoy, and they certainly do deserve a film about them. Although not an adaptation, Minions is set approximately fourty years before the events of Despicable Me which loosely uncovers their origins in a somewhat comical, parody-like effect. By following through traits of history and modern day life, the Minions go on a wild ride across the world and it is certainly a hilarious route along the way. Humour is the fuel behind the characters’ cultural status and that is what made Minions a successful spin-off, though the film does have its few problems.

As expected, the animation was splendid filled with rich imagery that enlightens the charming tone of the film. However, the film does not quite connect to the 3D conversion and unfortunately, it is because the imagery (as clear as it is) and camera shots do not convey to the breath-taking experience of three-dimensional cinema. In addition, the film perhaps did not have much to go onto, emotionally, as it was primarily the humour from the Minions and their figural expressions that would make it fun. In this sense, Minions did not provide as much warmth to the audience like the two Despicable Me films. The plot, of course, wasn’t going to be serious because the protagonists aren’t but there were some narrative elements in Minions that touched upon originality and uniqueness. For example, the evolution of Minions throughout moments of history, such as Ancient Egypt, was interesting because it allowed audiences to understand progression of fictional characters throughout our own history. The dialogue, particularly during scenes just featuring the Minions, was also hilarious as it often combined both their own witty language and often English.

In Despicable Me and its sequel, we know the Minions as a large group under Gru’s tenure but here in this spin-off, we are introduced to them as individuals. By following specifically Kevin, Stuart and Bob, the trio become joint protagonists in their adventures from the Antarctica to New York, Florida and London. Their path leads them across new characters including Scarlet Overkill, the main antagonist and voiced by Oscar winner Sandra Bullock, and a parodied version of Queen Elizabeth II. The film centralises the Minions as the central focus and exaggerates many cultural aspects, including the United Kingdom’s government, as the Minions being up to no good is who they are and what the audience want to see. It may be considered stupid but being a film about the witty and clumsy Minions, it delivers in the sense of satisfying adults and certainly children.

As the film begins, Minions serves as a spin-off to Despicable Me but as the narrative developed, the film ultimately becomes a direct prequel. The film provided hints in the trailer, such as (40 years B.G. (Before Gru)), and it was a friendly touch leading from Minions to the events of Despicable Me and their lives with Gru. Minions did not have to be made at all and it may not need any more installments (other than Despicable Me 3), but they deserved their own stand-alone film and it is a fresh, fun, and enlightening treat for audiences of all ages.