You just dont cut yourself to ABBA! 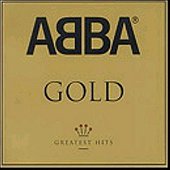 I've finally reached that stage in my life where I'm happy with the way I am and the cards I've been dealt....as a result I recently came out as an ABBA fan, and I have to say I feel great.

ABBAs songs aren't particularly moving and they're certainly not in my short list of funeral songs, but like it or not you WILL know every track on this album...they're more catching than typhus (that's the last metaphor I promise).

As proof of their timelessness and status as Pop Gods, ABBA are the most covered band of all time.

It's not cool to like ABBA, but I ask you? In modern music, with generic bands making forgettable ballads, 2-a-penny rap artists singing about gold and arses, and greasy haired pseudo Goths making millions of children carve the word 'hate' in their arms with compasses....I'm glad we have ABBA!

All their best songs are on here and its well worth the buy for anyone out there who has a last remnant of cheekiness about them.