Review of Terminator 3: Rise of the Machines 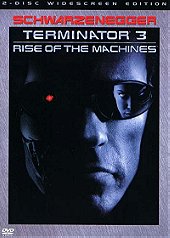 "Katherine Brewster, have you sustained any injuries?"
"Drop dead, you asshole!"
"I am unable to comply."

Don't understand why a lot of people didn't like this sequel as I thought T3 was a lot of fun. Stubborn Cameron loyalists? While the screenplay progression echoes with series familiarity, the T1 & T2 references all clicked with the right amount of humor; Arnie's traditional introductory search for clothes and sunglasses gag is a good example. Plenty of spectacular, OTT Terminator-style action scenes including the incredible firetruck/semi chase/mayhem. Only the nonsensical bathroom brawl and and overly prolonged final fight with the TX felt like excess baggage during this thrillride. Kristanna Loken is made-to-order deadly gorgeous as the new Terminator although she is given even less personality than T2's liquid metalman Robert Patrick. However, adding two legit top-drawer actors to the cast gives this entry an extra boost that you could forgive being absent in the first two movies. Nick Stahl gives John Connor the right level of trepidation and survivalist savvy that a burden of knowing you're supposed to become a hero in the future would bring. Meanwhile, Claire Danes' bountiful skill turns a character that on paper exists mostly to scream and flee into a 3-dimensional woman coming to grips with sudden loss and the horrifying knowledge of what is to come. The great gutsy ending was a real surprise bombshell - literally. On the DVD, the commentary track includes a lot of Arnie which is always gold and there's a very funny deleted scene that finally explains why all the T-800 series models look & sound like him. Terminator 3: Rise of the Machines favorably advances the overall story while successfully avoiding the common sequel trap of feeling like a cash-grab, which makes the first 3 Terminators the most satisfyingly entertaining trio of action movies behind only the original Star Wars and Lord of the Rings trilogies.