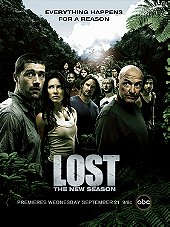 I really loved this series when it first began, it was clear that the production values were astronomic, and such use of a mixture of parallel, non linear and linear storylines was unprecedented in television.

Lost really raised the bar in terms of what was expected from this medium. At this moment in time the plot is still unclear, and the level of character development is beyond deep. Every new episode raises further questions and the relationships between the characters becomes more and more of a complex nexus.

But aye, there's the rub.

All these questions and very little resolution are making the series a little wearing now. Lost breaks so many conventions, it has become difficult for anyone but a savant to follow. The loss of Charlie in the last series means there are now no longer the moments of comic relief that gave the mind time to stop and process the episode.

I've not given up on Lost yet, and still like it..but am becoming more and more aggravated by it and will soon lose interest if some sort of resolution isn't found.