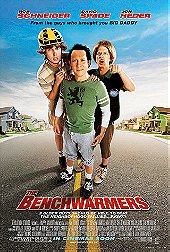 Don't do it...don't even see it as a sick perversion.

I heard of Benchwarmer's..with its casting of Rob Shneider and its reliance on fart jokes in lew of a plot..like Bond, meeting Dr No, I smelt the stench of my nemesis Happy Madison Productions.

I only watched it recently, if anything to confirm what I already knew. I was surprised though, it arose a whole new level of distain that I didn’t know I had.

Shneider, along with 2 adult geeks (Jon Heder and David Spade) are employed by a geeky millionaire (not Bill Gates) to form their own baseball team for nerds...'The Benchwarmers'.

It was just Heder doing his usual 'I can’t run or play sports' routine, flanked by fart gags. Oh and the introduction of some midgets to laugh at.

Avoid this film and ANYONE who likes it.