An insult to animals everywhere. 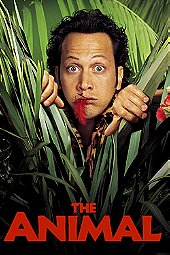 The plot of this film is so insignificant and shallow, it's hardly even there.

This film is just an excuse for Rob Shneider to do some animal impressions and eye up a goat. This movie, doesn’t even deserve one star...in fact it had a detrimental effect on my health and wellbeing.

'The Animal' and for the matter, Rob Shneider, is an insult to anyone who comes into contact. It's so unintelligent; it's anti intelligent, undoing hundreds of years of progression in 80 minutes. After an accident Shnieder is given the organs of various animals...and with no scientific basis at all, begins to act like them.

The whole thing is an affront to all the senses, and is wacky comedy at its worst....show me a man who loves wacky comedy and I'll show you an idiot.