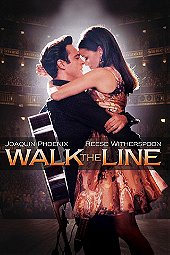 Johnny Cash was a genius and the story of his life is definitely worth telling. 'Walk the Line' does the job and then some.

Joaquin Phoenix not only acts and looks like a young Johnny Cash, but mimics his singing voice so accurately, it’s hard to tell the difference. If that's not enough, Reese Witherspoon's imitation of June Carter is even better.

Witherspoon won the Oscar for the best actress in a lead role while Phoenix was nominated for best actor. There is no doubt that both out do themselves in this film and the sincerity of the Cash/Carter relationship is never called into question.

This film has a very wide appeal, it is dark and moving in some places and light-hearted and comical in others. What’s more, some superb performances of Cash and Carter’s songs, act as the cherry on the cake.