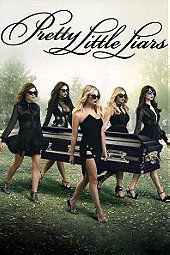 Pretty Little Liars (often abbreviated to PLL) is an American teen drama mystery–thriller television series loosely based on the popular book series of the same title, written by Sara Shepard. The show premiered on June 8, 2010 on ABC Family.[1] After an initial order of 10 episodes on June 28, 2010, ABC Family ordered an additional 12 episodes for season one.[2] These episodes began airing on January 3, 2011 and ended on March 21, 2011.[3] The ratings success of the first 10 episodes prompted the book series to be extended beyond the initial eight novels.[4]

On March 26, 2013, ABC Family announced that a spin-off, Ravenswood, would air in October 2013.[5][6] The spin-off show aired ten episodes before being canceled. On June 10th 2014, Pretty Little Liars was renewed for its sixth and seventh seasons.[7] In November 2014, actress Lucy Hale confirmed the seventh season will be the final season in the series.[8]