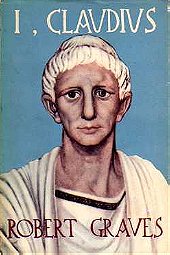 I, Claudius is like a modern day soap, spent in Ancient Rome. Murder, adultery, perversion and corruption rule the day. This is a semi-ficticious book, in that it is based on many real sources (Suetonius' 12 Caesars, Plutarch and Tacitus), but itŌĆÖs given a lot of creative licence by Graves.

The story is written like a hidden autobiography of the Emperor Claudius, describing the scandals and atrocities that surround him, as he survives throughout. Claudius plays upon his stutter and lameness in order to fire rumours of his stupidity, and decrease chances of his assassination. Graves takes a sympathetic view of Claudius, through the rule of Augustus, Tiberius, Caligula and his own succession.

The character of Caligula is endlessly entertaining, driven mad by a brain disease...he believes he is a God and begins to impose a reign of terror, taking his sister as wife. In Augustus' Reign, his wife Livia poisons, murder and frames every person of power who stands in the way of her son (Tiberius') succession.

Many historians have criticised Graves for his embellishments, he has also been criticised for borrowing too heavily on one source (Suetonius). But don't take this as a fact book, read it as a genuinely interesting story, full of all the greatest human vices that fascinate us so much.