The weird kid can be 'heart'. 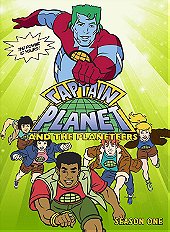 Captain planet: A green, Kevin Bacon look alike..out to save the environment, even before Al Gore invented global warming. You couldn't ask for more.

Each member of the Cpt Planet team has a power, 'earth', 'fire', 'wind'. Every episode 'heart' would moan that he didnt have a cool power. Every episode Cpt P would take him to the side and tell him, he was the most important of all. However when we played it at school we always made the kid that always wore a beret be him.

For a while it made us run around the playground shouting at kids who dropped litter..but then my friend hit puberty and it was Baby Sitters Club from then on out.