A violation of human rights laws. 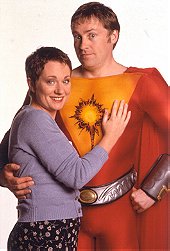 In June 2000, 58 illegal immigrants were suffocated in a Dutch goods truck. In June, 2000 I watched 'Mr Hero' for the first time. I'm still not sure who suffered more.

The storylines were paper thin and although it reeled off a thousand jokes a second, I failed to laugh at one.

This can't get any worse, I thought.....I was wrong. Next they introduced a wise cracking baby. A crude talking mouth was superimposed onto a baby, but that wasn’t the end….it got worse still. They got rid of the only one who could act (Ardel O'Hanlon) and replaced him with the effeminate James Dreyfus, who couldn’t play a heterosexual, married man more than the elephant man could play Cary Grant.

'My Hero' isn't even funny on a sarcastic/ironic level. Its so excruciatingly bad, they're using it as a torture in the next Saw film. I believe he has to chew his own arm off to get to the remote.