The perfect film for a girls night in. 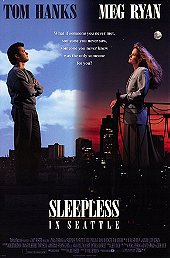 You know what?! In the past, whenever I recalled 'Sleepless in Seattle' I said it was bad. However, whenever I watch it, I think it's beautiful, it makes me cry, I want to curl up with a duvet and a mug of tea.

I'm inclined to believe that this is all about pretentiousness. Nice films like this often miss out on critical acclaim, because critics, like myself...don't want to and are ashamed to like it.

It's a lovely story, incredibly romantic...and no less than the father of the modern rom-com. Tom Hanks gives an amazing performance (as he always does), even Meg Ryan out does herself.

The last moments meeting on the top of the Empire State Building, has to be one of cinemas most memorable moments.

Sleepless IS a chick flick, but I implore you not to be ashamed of liking it...I'm coming out now as a fan of this film, it brings out every ounce of ridiculous, emotional, silly girliness in me; and now and then that's what every girl needs.