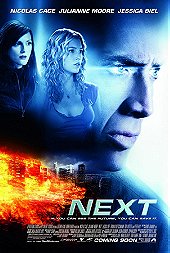 This film wasn’t that bad...I wanted to hate it..but I couldn’t hate it entirely. I like the idea of seeing slightly into the future, the protagonist constantly assessing and reassessing their next move.

The blurb for the DVD used the words 'terrorists', 'Vegas Magician', 'nuclear bomb', 'against the clock'. Which made me immediately buy it for my mum, a notorious lover of crap action films.

It was however, better than I thought it would be. On many an occasion I was genuinely impressed at the storyline and concept. But I cannot stress how much better it would have been, had they not cast Nic Cage.

Does Cage meet any of the criteria needed in an action hero?

Body built for vest wearing: No
Roguishness: No
Buzz cut: No
All American: No
Low, gravelly or alluring voice: No
Good looking: No

In short, Cage is not an action hero. On more than one occasion I physically laughed at him running away from explosions and an avalanche of cars; like an injured Daddy Long Legs. I laughed even harder at the 'romantic' schpeel he was given to utter, as his physical self obviously wasn't a believable attraction to Jessica Biel.

Cris Johnson: "There's an Italian painter, named Carlotti, and he uh, ahem, defined beauty. He said it was the summation of the parts working together in such a way that nothing needed to be added, taken away or altered, and that's you. You're beautiful."

If a man said that to me...well he better not look like Nic Cage at the same time..let’s say that. It reminded me of a friend of mine who everyone says is like a duck/rat hybrid.

Despite it all, I’d say ‘Next’ is worth the watch. It will give you a good laugh in places and will keep you mildly entertained for a small time.