Oliver!, cures what ails ya. 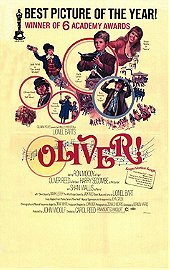 Anyone with a heart in them cannot help being lifted by this musical. I'm yet to meet anyone who doesn’t know at least one song...'Oliver!' is a British Institution.

Every single song makes you want to join in and stirs an unexplainable pride in the heart of any Londoner. Every single adaptation of Dicken's Oliver after this has yet to hold a candle. Nobody has played a better Dodger than Jack Wild, no Sykes is as good as Oliver Reed's and that’s not to mention Mr Bumble, Nancy and of course Fagin.

Funnily enough this production has become so popular that the storyline has replaced Dickens' original in the minds of most. Very few realise how much this movie deviates from the original plot of Dickens', 'Oliver Twist'. I won't spoil it for you..but the movie is barely like the book at all.

It's nothing like the book but still, I don’t care. 'Oliver!' is like the drunken uncle at a family party. His drunkenness is not normal, and maybe a tad worrying... but who cares, he has a cone on his head and is a good laugh.

Next time you're living in pestilence and poverty; driven to prostitution and crime in the dark and unforgiving streets of London...grab a gin and 'ave a good old Cockney Knees-up!