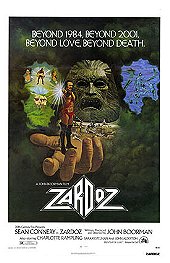 I admit it, I do not understand this movie. I whole-heartedly wish I could, but I can't. Just when I feel like I've grasped what it's trying to say, I lose it again. I don't know if it's because I'm not philosophical enough, not smart enough, or maybe the movie really is a bunch of nonsense. I have no clue. All I can say is that this is really a bizarre, strange movie.

If someday I could understand this movie, I think I would love it. But even though it was mostly gibberish to me, I thought it was genuinely interesting with really interesting visuals and ideas.

It's camp sometimes and it certainly hasn't aged well (Sean Connery in an orange thong, for example), but I enjoyed watching it. When I wasn't trying to scour for some deep message, I loved its sheer goofiness.

I honestly don't think I'll understand this movie until someone word for word explains every scene of this film, but I always watch it for a spark of creativity when I need inspiration to paint. The visuals are dreamy and mesmerizing, and genuinely beautiful in some parts.

To make a long review short, Zardoz makes no sense to me but it does its part by standing out among other Sci-Fi films (for better of for worse) and cementing itself in my brain forever. I can honestly say that I'll probably never forget watching this. It was that bizarre.