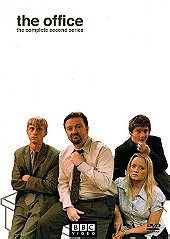 The Office is an easy show to watch and get into at only 12 episodes and two specials, but it goes through so much character development and story in such a short period. I was caught off guard by the touching drama that seemed to pop in once in a while, but it felt real and unforced like many television shows I have seen.

I enjoyed how natural and familiar the setting and characters were in the show. I could see the characters as real people working in a real office. The jokes are subtle and usually based on an awkward situation going out of control (using started by Gareth or David), and making that awkwardness both familiar and hysterical. I was constantly in hysterics while watching, which is embarrassing because I have a laugh not unlike Ricky Gervais...

Naturally, I think the best part of the show is the main character, David Brent, a sort of boss from hell. While he is painfully funny and awkward, I was surprised at how sympathetic I was to his character. David Brent is narcissistic, ignorant and passive aggressive, but seems to be so because of his insecurity in himself. He plays for the cameras and tries hard to be the funny, laid back boss, but when caught naturally, he relaxes and shows himself to be a self conscious, lonely, sad man with a surprisingly sweet side. A lot of people label him as an asshole, which I think is true in some way, but I think David is a sincere, if not misguided, man who just wants the best for his team and the best for himself.

(Of course, those are just my thoughts on the character. I've heard lots of different opinions on David Brent.)

Phew, I went off on a tangent there.

It was refreshing to see some three dimensional characters in a television comedy for once. While other good shows like The Big Bang Theory and Modern Family, for example, have funny and likable characters, I doubt I could write as much as I just did about David Brent if I were asked to write about, say, Howard Wolowitz from Big Bang Theory.

tl;dr, The Office is a brilliantly done, realistically portrayed mockumentary with relatable characters, a great setting and atmosphere, and most importantly, it's hysterically funny. An amazing show done by my two favorite comedians.