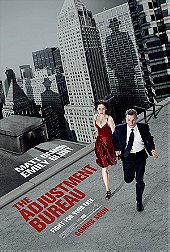 Water is such a powerful thing (when you think about it, it can save your life but it's also powerful enough to kill you) that it doesn't surprise me that it's often used as a contrivance in movies, or as a way for movie heroes to overcome some of the obstacles that the plot presents them (remember SIGNS, anyone?). That's the case in THE ADJUSTMENT BUREAU, a film in which water is used as a way to circumvent what's getting in the way of our leads, though if the fact that that's so ridiculous were the ONLY problem I had with the film, I'd still recommend it, because it's a minor point. But the bigger problem comes with the fact that THE ADJUSTMENT BUREAU is a film that has maybe one or two interesting ideas about the debate between free will and predestination, but those small ideas get diluted into an overly ponderous and abstract film that doesn't end up offering much in the way of insight.

The film would still be recommendable if it at least delivered on its "Love conquers all" philosophy. You see, that's not a philosophy I agree with, but I take no issue if a film believes in something that I don't... as long as it does an effective job at displaying that belief. THE ADJUSTMENT BUREAU is one of those dozens of movies in which the two lovebirds fall in love in the first 5 minutes of knowing each other. You may argue that, since a movie is only less than two hours long, it can't waste that much time with showing the two leads going through the courting motions. And my response is that, if a movie's payoff is supposed to be "Love conquers all" then yes, we DO need that development. This isn't a silly romantic comedy we're talking about here - it's a movie that believes in the power of love, and because of that, it needs to make us believe there IS love in the first place.

The titular organization works to ensure "things happen according to plan," and part of the adjustment bureau's plan involves controlling the political future of young Congressman David Norris (Matt Damon). David is in love with Elise (Emily Blunt) and really wants to be with her, but for reasons we don't find out till later, the adjustment bureau can't allow that to happen, because it would have a huge effect on David's political career. This synopsis and the film's trailer will probably lead you to believe that the members of the adjustment bureau are a couple of badasses you wouldn't want to mess with, but that's hardly the case. Actually, these people look like they've all come out of a bad 1940's thriller. One of the worst scenes takes place when David is on a boat with one of the "adjusters" who is explaining how the organization works, and the dialogue is horribly stilted and pathetic: the lines "There's something about water" and "Are you an angel?" are said one after the other, and the way they're delivered is almost laughable. You see, the "adjusters" aren't nearly as mean as the trailer would have you believe (they're conflicted weaklings, at best). In a ridiculous plot turn, one of them actually becomes interested in HELPING David, and when David asks him "Why are you so different from the others?", I thought he was going to respond "Well, 'cause I'm the token black guy in this movie, so I obviously HAVE to have a heart of gold, while all those white, corporate-looking guys HAVE to be evil."

In the midst of all the blabbering the film does about whether humans are free to make choices or not, there are two ideas that I did find interesting. The first is the idea that perhaps at ONE point something was meant to happen but then it STOPPED being meant to happen, but after it stopped being meant to happen, there are still "remnants" of that unfulfilled event that may be trying to trickle into your life. The other thing I found interesting is a scene in which one of the "adjusters" literally goes through the world's ENTIRE history (from the Dark Ages to the Renaissance to all the armed conflicts of the 20th century) and talks about the way in which "adjusting" was (or wasn't) involved in those particular events. The script makes some very interesting and accurate observations here about the way humans have gone and where they are now - if I could say something like that about the rest of the lines that are delivered in the film, we'd have a surefire winner here.

The other strength in THE ADJUSTMENT BUREAU (and the reason why I certainly can't call it a bad movie, despite not being able to recommend it) is, not surprisingly, the performance quality offered by Matt Damon and Emily Blunt. For Damon, the role is less showy than what he's had to do in some of the more action-packed films he's been involved with, which I think actually makes this role harder than, say, Jason Bourne, and he handles it well. Blunt is luminous as ever, and to be honest, thank God for her, because considering how hard the film makes it for audience members to truly believe that David could be so desperately in love with Elise, if the actress playing her had been bad or annoying, the film may have bordered on insufferable.

There's no doubt that the debate as to how "free" we are to do (or not do) things is great fodder for cinema because you could come up with countless movie situations to explore the subject. I won't spoil the ending of THE ADJUSTMENT BUREAU, but I will definitely tell you that I'm annoyed that the film's ultimate message is so overly optimistic and motivational (the final voiceover might as well have told us: "Come on! You can do it!"). Life isn't that simple, and I'm aware of the fact that movies aren't necessarily meant to accurately capture the complexities of life, but when a film TELLS you that it's interested in exploring such a heated philosophical topic, I don't think it's too much to ask that it deliver on it. On a personal level, I don't think the "free will vs. predestination" is a worthwhile debate to have: if you're happy with what you're doing, who cares if you're deciding to do it or if there's some hand guiding you towards it? Still, I don't mind it when a film makes a decision to explore the question, but it has to do it at least reasonably well, and not in the muddled and half-assed way that THE ADJUSTMENT BUREAU goes about it.