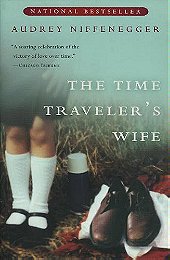 I have been finding myself wanting to say more about the books I read, and actually talk about the ending. And for those reading these reviews that might want to read the book, they are going to come across spoilers. So I am marking areas where they are going to be, and areas that are safe to read. Also a warning that this review may be as long as the book was.

Here is a brief description of the book, thanks to Amazon.Com and Publishers Weekly.

This … tale works on three levels: as an intriguing science fiction concept, a realistic character study, and a touching love story. Henry DeTamble is a Chicago librarian with “Chrono Displacement” disorder; at random times, he suddenly disappears without warning and finds himself in the past or future, usually at a time or place of importance in his life. This leads to some wonderful paradoxes. From his point of view, he first met his wife, Clare, when he was 28 and she was 20. She ran up to him exclaiming that she’d known him all her life. He, however, had never seen her before. But when he reaches his 40s, already married to Clare, he suddenly finds himself time traveling to Clare’s childhood and meeting her as a 6-year-old.

First off, we get a first person account from each Henry and Clare. Even within a chapter, or in the middle of an event, the narrative switches from one to the other. It is very clear, with their names heading the text. It was the first time I have read a book where the narrative would switch mid-event. I feel it added so much more to the story, instead of reading one account of the event in one chapter, and in the following chapter is another account of the same event. Also, each day, month, and year, as well as ages of Henry and Clare, and sometimes ages of both Henry’s, are clearly noted at the beginning of each section.

Now there is more to Henry’s trips then just disappearing into the past or future. He can’t take anything with him. And I do mean anything, including clothes. He leaves a pile of clothes in the present, and shows up naked where ever in time he goes. This leads to many problems, especially in winter, but mostly just showing up (possibly) in public places. He is arrested many times for either public indecency or theft (stealing clothes and/or food), obviously getting away because he disappears again and is returned to the present.

Though there are times when these trips do yield good things. Henry’s mother, a famous opera/classical singer, was killed in a car accident when he was six years old, and he finds himself traveling back in time to hear her sing, or see her happily walking while pushing a very young Henry in a stroller. He also runs into friends or family that know of his condition, and sometimes when in a hard spot they help him. He even runs into himself.

The description says that there are “some wonderful paradoxes”, and I am not sure what is meant. Actually, if anything, this book doesn’t seem to create them. Or if you live with the time paradox “law’ that if you did run into yourself traveling back or ahead in time, or if you did certain things changing the outcome of events, that it would screw everything up. But this books presents it with the simple idea that you can’t screw it up if you know what is going on. Henry always knows of his condition, so he is not surprised to see himself, so there is no future to change. So the events that happen are presented as predestined.

I also don’t know if the “wonderful paradoxes” comment means it was wonderful to read or wonderful for Henry and Clare. Because for Henry and Clare, some of the paradoxes are quite horrible. And I don’t mean graphic, but sad, adding much greater levels of emotions and situations that the characters have to deal with.

Henry is sent back many times to the scene of his mother’s fatal accident. He was in the car too, and was miraculously transported to another time just before the piece of steel crashes into the car. Henry most likely would have died in the accident had he been in the seat and lives with some guilt that he should have died, too. As it is, he was found a far distance away on the shoulder of the highway, without any clothes. Henry mentions to Clare that if anyone could go back to that moment, they would find many versions of him watching the accident, hiding behind trees or other cars, with one version even finds his six year old self laying on the side of the road and points it out to the emergency crew.

Henry also appears years in the past and is standing in front of his ex-girlfriend when she commits suicide. He was told that she did, but didn’t know that years later he would be with her at that moment. He also comes across the moment that leads to his death, and when he travels to the future, looks up his obituary to find the exact date. He also faces amputation of his feet after being stuck outside in sub-zero temperatures when traveling back to one winter. These add to his growing unease as he gets older. Fighting his disability and what he knows is inevitable, yet wanting to stay with Clare and their young daughter Alba. In some respects it may draw parallels to someone terminally ill, and also how Clare deals with the feeling that Henry knows when his life ends, and that it is soon, and that Alba, who is stricken with the same disorder, is also aware about his impending death, given her conversations with herself from the future.

NO MORE SPOILERS BEYOND THIS POINT

During his times of traveling to the past, and when he runs into friends, Henry must deal with them asking how things turn out. He is always hesitant to say anything. He feels that they need to let these moments happen naturally, though he has found that even knowing and telling doesn’t ever change anything, because it all seems to be predestined. All of this plays on Henry’s mind, because all he wishes for is a normal life. And he tries to pursue as normal of a life as possible, and except his condition.

Through all this, the story actually follows Clare’s life chronologically. There is the odd chapter or moment that is thrown in out of order for the sake of the story, and are very well placed. We follow Clare as she meets Henry for the first time, as a six year old running into a 40-something naked man in the meadow behind her home. She goes through school, while her love grows for this man, and yet he will not reveal why he keeps coming back to her, and what the significance is between them. Eventually she guesses, and yet Henry will not reveal any specifics, making Clare play out what must happen.

The strength of the bond between Henry and Clare is well written, as are the depths of their characters and some of the supporting characters. And because of this, and the premise of Henry’s disorder, it makes for an incredible story, and with one of the stickiest ideas: time travel. Time travel stories are always filled with this great fear of ruining things via the “chaos theory” or “butterfly effect” as they are called. And maybe Niffenegger “cheated” by making things unaffected, or already established because of Henry’s time traveling condition. But that is what made this story, because it opened so many avenues to explore, and one of those was the room to develop such strong relationships and characters which drove the story. She also used some foreshadowing of events to come, or gave us the result of events, and the reader is yet to find out what happens, as is Henry, until he travels to those times. With writing like that, and the story itself, I found myself not wanting to put the book down. And that’s usually a good sign that you are enjoying it.

I would recommend this book to just about anyone. This is in no way a science fiction novel. It is a grand love story of great character with a science fiction theme. A non-science fiction reader may need to open up to the ideas of time travel, but it is worth it, because the story is it’s greatest reward.