Ewan! Leave the Misses at home! 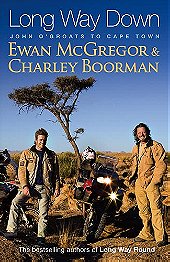 Long Way 'Round was really good, the almost brotherly relationship between Ewan and Charley was fun to watch, the journey around the world on motorbikes was a good premise. Obviously nobody told them, if it isn't broken don't fix it.

The journey part in 'Long way Down' was interesting, from the North of the UK to Cape Town, South Africa. The Ewan/Charlie dynamic was great at the beginning but ruined by the addition of McGregor's wife. Eve began without a licence and none of the biking experience the pair picked up in Long Way 'Round. The challanging routes had to be avoided and the 'lads day out' feel dissappeared entirely. The validity of the friendship was cast into doubt, and Charlie was awkwardly left as a third wheel for a good deal of the series.

Really not worth watching and nowhere near as good as the first series.