In the Name of the Father review
256 Views
0

Postlethwaite is a legend. 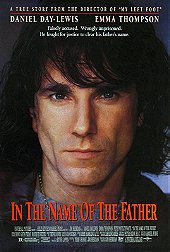 I just happened to catch this film the other day; I've watched it 3 times in as many days.

The film is based on the real life incidents of the Guilford 4, wrongly arrested for the Guildford Pub IRA bombings. Daniel-Day Lewis and Pete Postlethwaite play father and son Gerry and Giuseppe Conlon; and they play them outstandingly. The accents are flawless and the acting is second to none. Postlethwaite, as usual makes you believe that he is actually feeling the wealth of emotions he displays, wrongfully imprisoned and facing his imminent death. The performances in this film made me up my ratings for most of the main cast.

This film not only depicts some controversial and horrible real life events, but is also an entertaining and fine acted piece of drama, with a number of particularly moving scenes and stunning cinematography.