It Pauls through, just. 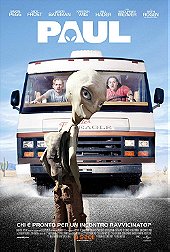 Good, cinematic entertainment? You can count on it. A good, fresh comedy? Far from it. Paul is full of forced jokes, based on unnecessary vulgar language and ridiculous, hasty set ups. On top of this, the visual gags are pointed out by the characters because they assume the audiences are too stupid to pick up on it themselves. For example, as seen in the trailer, Paul is dressed as a cowboy to go undercover on the highstreet. Pegg's straight-man to Frost's usual bumbling comic character states 'We are just a normal family, walking through the street, with a cowboy'. This exposition is pointless. We don't need a fucking commentary. Take Airplane!, for example. One of the best sight-gag based films of all time, each joke is dished out one by one, with no dodgy artificial flavours thrown in from the film-makers. It would appear that Pegg and Frost feel that certain images are not funny enough on there own, resulting in Pegg's unoriginally named character Graeme Willy irritatingly stating the obvious. This is made worse by the fact he apparently mutters it to himself. Such a transparent technique is laughably amateurish and one should expect better because Pegg and Frost are a genuniely talented duo.

The most soul-crushing thing of all is the horribly annoying character of Ruth. One of modern day filmic stock characters, she is the typical outcast young girl who finds herself coming out of her shell. Catharsis and all that bullshit, done in the most cliched way possible. Ruth begins her entry into the real world with unfortunate anti-Christian jibes from Pegg, Frost and Paul (Seth Rogen mis-cast). They are seemingly stating that any person of faith is a fool and they use a gross strereotype to enforce this unsubtle prejudice. If it was subtle, I wouldn't have minded. Unfortunately, it is not. Granted, it can be assumed that it is Creationism that is being mocked here and not Christianity as a whole, satirising the general ignorance still held by several American people. However, due to the sudden onslaught, momentarily disrupting the tone of what is supposed to be a feel-good action-comedy, it appears far more vile and agressive than perhaps it needed to be.

Some hit and miss sci-fi references are fun to spot but they don't really go anywhere and the ending is so contrived and rushed, the pace of the film is diminished. Paul is fun but not entirely funny, although there are some moments that survive based on Pegg and Frost's unbeatable chemistry. Clever aspects do suffice, including a mixture of self-deprecation and self-celebration of British heritage and culture, being that this is written by two Brits. It nails American perceptions of Britain and British perceptions of America without becoming too cliched or insulting. As an Englishman, it was particularly fun to see that such moments were maintained in a film set across the pond.

The drawbacks of the film are incredibly noticable and such perceptions can be seen in the trailer alone. However, as far as entertainment goes, the heart was mostly in the right place. Pegg and Frost clearly put a lot of soul into the concept and the effort doesn't go un-noticed. It's just unfortunate that better care wasn't taken to iron out the script and to straighten up the often sloppy plot.