Review of I Love You, Phillip Morris 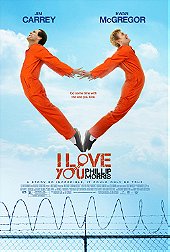 Glen Ficarra and John Requa attempt to overthrow the genre of romantic comedy, replacing the familiar boy meets girl with a boy meets ... boy and even in prison! With humor that throws political correctness from ... back door, but never to make fun at the expense of the two main characters and their sexual identity,«I Love You Philip Morris» offers most plenty of laughter and unexpected tenderness. But then changed direction two or three times to the point that we fail to grasp the overall orientation.
Jim Carrey in this role resorting to the usual maniere,which over time has been perfect,but Ewan McGregor is the one who wins the duel of interpretation by giving discretion to the naturalness Philip Morris,a character less developed than that of Steven Russel,which is partly explained by the fact that watching the events in the light of the second.