The Godfather: Don't forget to love it. 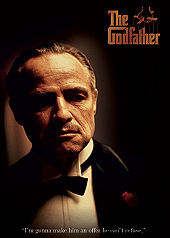 Real film fans are scared to love 'The Godfather' these days; it has become the immediate social site, fav film answer for any shumck pretending to appreciate 'real' cinema.

Don’t let this attitude take over, there is a reason they have picked up on it...it is one of the greatest films ever made. Every little part of this film is master crafted; it should be on the walls of the Sistine Chapel.

The music alone draws you in, while panning shots sweep across detailed and busy streets, even the lowliest extra plays his part like a pro.

Very few other films can boast such a talented cast as Marlon Brando, Al Pacino and James Caan...not to mention the sea of brilliant supporting actors. The main characters are complex and interesting; the plot of vendetta and betrayal is gripping to the last.

The Godfather is such a pleasure to all the senses that it doesn't seem like it's from the same planet, let alone media as today's ten-a-penny Hollywood blockbusters.

Films like this will always be needed to appear now and then, shake off the high-gloss, Jennifer Lopez veneer from Hollywood and let the real artists crawl out for a spell. Come to think of it we're about due.