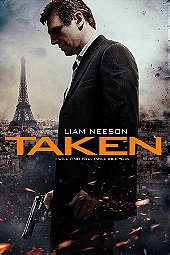 AAAAAUUUUGGGGHHH! How could Liam Neeson agree to something so fricking terrible?!?!?!

Let's try to completely ignore the fact that, once again, they speak English without any communication problems all over the world. We'll even ignore the fact that at one point, he is IN FRANCE belittling Albanians for being immigrants...in ENGLISH!

How about the rest of the plot. Dad saves girl after 72 hours of capture into a sex slave ring where her friend has died of an overdose, and the daughter is still miraculously a virgin, who requires no therapy whatsoever because apparently, they must have only drugged her friend, right?

How, exactly does the dad get on a plane and enter into the United States after killing more that a dozen men and having to escape from the French police so many damn times? Did anyone ask themselves that?

This movie was laughable. Countless times, after listening to his threatening soliloquies, I really wanted to be a voice over for one of the characters that said something like "I'm an Albanian in France...I don't SPEAK ENGLISH! If you want me to be afraid, LEARN FRENCH OR ALBANIAN!