Not as funny or as heartfelt as it wants to be... 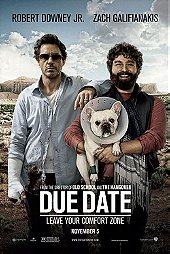 "If I miss the birth of my own child, I'm gonna choke you out with your own scarf. Wrap that thing 'round your head, and choke you out."


After 2009's surprise hit The Hangover, one would think that reuniting director Todd Phillips with the inimitable Zach Galifianakis would lead to another laugh-till-you-drop comedy. Add the tremendously talented Robert Downey Jr. to the equation, and Due Date's prospects would seem to be stratospheric - it'd have to be impossible for the film not to register as at least moderately amusing. But unfortunately, Due Date is proof that pedigree doesn't mean everything. Plus, due to its basic plot outline, it would be easy to compare Due Date to John Hughes' hilarious and heartbreaking 1987 feature Planes, Trains & Automobiles. Indeed, this could be considered a loose remake of Hughes' classic. But while Planes, Trains & Automobiles confidently stands tall as one of the greatest comedies of the '80s, Due Date comes off as a pale, uninspired rendition lacking in wit which will be easily forgotten in a few years' time. 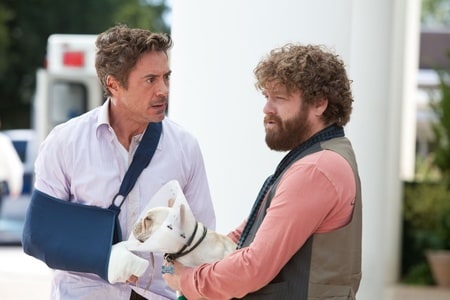 With his pregnant wife Sarah (Monaghan) scheduled to undergo a C-section in a matter of days, irritable, tense businessman Peter Highman (Downey Jr.) plans to fly home to Los Angeles after finishing his Atlanta business tip. Unfortunately for Peter, he has a slight altercation on the plane with uncouth fellow passenger Ethan Tremblay (Galifianakis) which leads to both of them being kicked off the flight and placed on the no-fly list. Unfortunately, too, Peter's wallet (and thus his ID and money) is missing, so he has little choice but to pair up with Ethan (who's looking to make amends) on a disastrous cross-country car ride which severely tests Peter's sanity and limited good nature.


Galifianakis exhibits reasonable comic timing and delivers effective pathos during the more dramatic moments, but his character is nonetheless every bit as irritating as Peter perceives him as, and Peter's frustrations over his companion are perfectly understandable. Then again, Peter is not a nice guy himself since he both physically and verbally berates Ethan. Sure, dark humour works when done right, but Due Date is too uncomfortable and therefore sporadically boring throughout. Plus, while the deep affection and understanding that accumulates between Steve Martin and John Candy is evident in Planes, Trains & Automobiles, the friendship between Peter and Ethan in Due Date ultimately comes too late in the game and feels forced by the requirements of the generic script. It took four writers to assemble the screenplay for Due Date (Alan R. Cohen, Alan Freedland, Adam Sztykiel and director Phillips himself), yet the quartet missed the mark in their attempt to replicate the genuine humour and deep-seated humanity which characterised Planes, Trains & Automobiles. 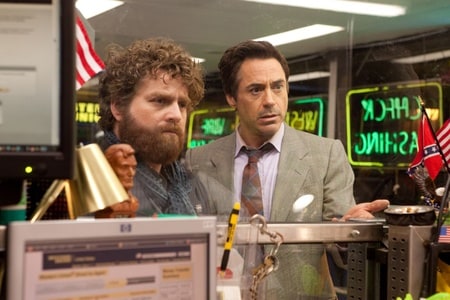 People should be wary of comedy trailers - marketing executives tend to assemble a montage of the funniest moments in the movie being advertised, and leave out the comparative dross. Due Date is another case of this. That's not to argue the film is entirely devoid of laughs, as there are a few amusing gags (95% of which were seen in the trailers). Downey and Galifianakis admittedly share reasonable comedic chemistry, but this merely results in a few flickers of what this film could have been with a superior script (I suspect the on-set footage and outtakes are funnier than what wound up in the final cut). What's also disappointing is that, while individual moments earn a chuckle or two, there are no entire scenes which work. Rather, the laughs are tragically sporadic. In addition, there are several moments which are not just unfunny, but serious and uncomfortable. The serious material is ineffective because one only attends a film like this in the hopes of finding surface-level hilarity. If anything other than hilarity is on the menu, we're not interested - especially if there are serious moments which make us feel uncomfortable while we're watching the film.


For 2009's The Hangover, Galifianakis played his character of Alan with a well-timed balance of spacey and stupidity, resulting in a scene-stealing performance. Hollywood likes one-trick ponies, of course, so the role of Ethan Tremblay is essentially a bigger and broader version of Alan in a main starring capacity. The shtick, however, wears out its welcome rapidly here, and the material is simply not strong enough. Worse, Galifianakis is nowhere near as endearing or as lovable as John Candy was in Planes, Trains & Automobiles. Meanwhile, this is not Robert Downey Jr. at his best. Admittedly, the role of a straight man is not particularly challenging or fulfilling, but Downey lacks verve and energy as Peter. In thankless supporting roles, a wasted Michelle Monaghan is mainly seen talking on a phone, Jamie Foxx awkwardly shows up as Peter's friend Daryl but exits with little impact, and Danny McBride is unremarkable in his one single scene. Also in the cast is Juliette Lewis as a drug dealer named Heidi. Could Juliette's inclusion be a nod to Todd Phillips' earlier film Old School, where the actress also played a character named Heidi? 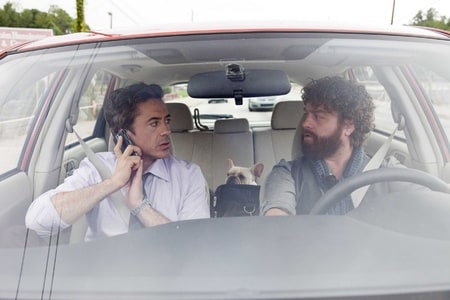 With most of the comic highlights and payoffs having been spoiled in the trailers, Due Date is not as funny as it wants to be, nor as emotional or as heartfelt as its occasional serious moments intend. Cars flip, dogs masturbate, and Peter is injured in various ways, but it's an awfully gloomy, boring drag because the material is pointlessly callous. Due Date is not deftly dark (like Bad Santa), but instead uninspired and uncomfortable. Nothing that happens to Robert Downey Jr. is even half as funny as anything that happened to him in his last buddy movie, Kiss Kiss Bang Bang...and that film wasn't even a comedy. Galifianakis is no Val Kilmer, let alone John Candy. Perhaps The Hangover will stand as a one-off phenomenon that filmmakers will constantly attempt to replicate with little success.