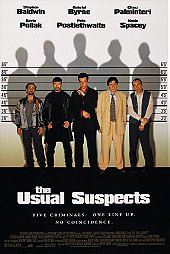 One of my personal favorites of all times. Maybe not THE best film ever. But one of those few films that everyone should see at least twice.

Everything about this film is great. Great acting, great script, great directing, not to mention the unforgettable ending. It's hard to believe that is the same director of Superman Returns (I'll get to that some day).

All actors (yes, ALL) fit perfectly in their characters, from the main parts to the smaller ones.

Gabriel Byrne as Dean Keaton is convincing as the ex-con trying to build a new life when he gets drawn back into his old life. Stephen Baldwin as Michael McManus is the smart-mouthed and cocky professional criminal. Kevin Pollak takes a big departure from his usual good comedy self to take a more dramatic role.

But the best of the film are Benicio del Toro, who literally takes a one-dimensional character with absolutely nothing in the script to give him character and he fleshes it out with brilliant mannerisms and memorable mumbling to show incredible acting creativity and Kevin Spacey who was simply born to be in this movie. His manners and fast-talking yet shy gimp nature are a treat to listen to throughout the film.

Without giving away much of the plot, the best and most genius parts of the movie are the subtleties. After you see the ending (I won't spoil) and the truth hits you like a ton of bricks, you have to watch it again. On a second time through, you'll jump up and point at the screen whenever a clue missed the first time is spotted.

It's even possible to watch the movie many times and see something new every time around. It's that attention to detail that make the deceptively innocent-looking Usual Suspects one of the greatest movies of all time.

And I'd like to recognize too the work of John Ottman, the composer of the soundtrack, it matches the action, the suspense and the acting, what makes the film even more delightful to watch.

Arnold Schwarzenegger: Movies i have seen. by Aprakadabra

Sylvester Stallone: Movies i have seen. by Aprakadabra

Movies Watched in 2010 by Adriano Lopes

The Japanese Collection by nataliegoes