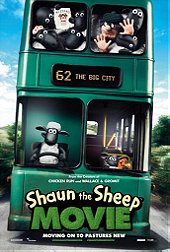 Since originally being introduced as a supporting character in Wallace and Gromit: A Close Shave in 1995, Shaun the Sheep has had his own television series through which has instilled another legacy within the Aardman world. ShaunвАЩs TV show served as more of a spin-off to Wallace & Gromit, and has since been a success. On the other side of things, mainstream cinema have released a variety of family-friendly spin-off features based on characters within popular franchises; examples - Puss In Boots, Planes, Penguins of Madagascar and the upcoming Minions. Shaun The Sheep Movie is a unique one, though, as it is in itself a spin-off so it is chopping off references from not only the TV series but capturing a relatable world from Wallace & Gromit where it all began. Shaun the Sheep Movie may be a very child-friendly film and is perhaps targeted more towards them than adults but the stop-motion is, as always, wonderful to watch and the story is fun.


Perhaps the most fascinating aspect of AardmanвАЩs work was their breakthrough triumph of stop-motion animation. Beginning with Wallace & Gromit, Aardman produced an era of this extraordinary filmmaking technique. Shaun The Sheep Movie is definitely the clearest and most gorgeous, visually, of any film they have done so far. This is particularly how the film highlights British landscapes, through wide shots, tracking shots and close-ups of specific props. In that respect, Shaun The Sheep Movie is very much a depiction of British culture, like Wallace & Gromit and Chicken Run illustrate, too. However, without being too cynical towards a child-friendly film and comparing it too much to past Aardman films, the plot lacked creativity. Despite there were some recycled aspects like returning characters from ShaunвАЩs spin-off series, it often appeared corny with clear plot holes. The humour was convincing, too, with the odd jokes aimed at a mixed audience, though its pre-school qualities make it funnier for kids. Still, this may sound too harsh considering that this film is more for childrenвАЩs eyes but that being said from an adultвАЩs perspective; Shaun The Sheep Movie should be a delight for them and, depending on sense of humour, for adults too.


In terms of characterization, AardmanвАЩs idea of a Shaun the Sheep spin-off feature seemed rather bold. This is primarily because the characters are mute and it is mainly the physical actions of the characters and camerawork which must move the plot forward for children to understand. Quite frankly, it worked pretty well and in some ways, it was like the first contemporary childrenвАЩs silent film. This is where a lot of previously stated humour was exhibited in a more slapstick manner than through dialogue, which is what kids like to see. As a more independent character in the film and his TV series, Shaun still feels the same sheep as from the series and in A Close Shave from 20 years ago. The return of other beloved characters from the TV show, including sheepdog Bitzer, the naughty pigs and the Farmer, enhance further warmth. The latter does resemble Wallace in some ways (perhaps related?), through love for animals, independent lifestyle yet their mutual clumsy and na√ѓve personality. Similarly, the primary antagonist - the animal catcher is typical as it makes his actions of catching stray animals, what seem realistically right, become villainous. He actually resembles Victor in Curse Of The Were-Rabbit.


Shaun The Sheep Movie is a delightful hats off to its predecessors, though not chronologically, and it is a heartwarming film for the family. You donвАЩt have to be an avid fan of Wallace and Gromit, Chicken Run or Aardman in general to enjoy this nor of the Shaun TV series. It has possesses many things that are friendly enough to be introduced to and enjoy - the story is simple to follow as are the characters. Nevertheless, despite being a successful TV series, Shaun the SheepвАЩs own feature film was perhaps irrelevant but it adds to the ranks of impressive spin-offs to past successful franchises and is another Aardman success.