Review of The Last Airbender 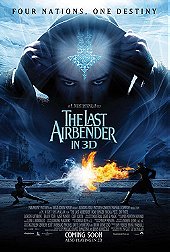 A child prohesied to save the world by using the ability to bend all four basic elements and defeat the Fire Kingdom, who have taken advantage of a hundred year lull in law enforcement activity to pull a corporate takeover of the rest of the world. Now if you can read that sentence all in one breath, you just may be the last airbender.

I love this story line and I love the animated series, and so I cannot rate this below five stars. Sadly though, this is another case of finding the worst child actor in existence and giving him a lead part. Less than halfway through, I was already hoping that one of the water bending exersizes would backfire and the Last Airbender would drown in his own stream!

The other two didn't deliver as much as they should have either, but I'm pretty sure that had something to do with the fact that the screen writers couldn't write their way out of a box.

Still, I have to allow for a bit of positivity. I actually enjoyed Dev Patel's performance as my favorite character in the animated series--prince Zuko. He's a little breath of fresh air...even without a script to back him up.

We shall say nothing of the director, as I would prefer not to follow the crowd of angry torches and pitchforks that began heading toward his front door around about the time the The Happening came out. Now, thanks to his dip into children's movies, it seems that there are little mini torches and toys r us pitchforks at the front of the mob!