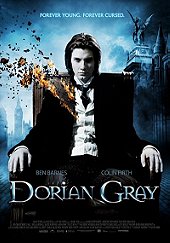 Oh, to be able to commit all of the seven deadlies over and over and over again without one thought toward the consequences. To be able to keep the beauty of youth forever. Would it be worth bargaining your soul? According to Mr. Gray, it would be...or at least placing his soul in a portrait that will take on all of the consequences of his actions and the destruction of age while he plummets into the deepest depths of debauchery.

That much of the plotline is based on the Oscar Wilde novel. Unfortunately, Parker seems to also have tried to delve into the dark mind of our protagonist just as well as Wilde does in the novel...with some unsuccessful results. While Ben Barnes is certainly attractive enough to pass as a period piece hearthrob, I just wasn't drawn to any other aspect of his character.

I expected a spark in the eyes of a young naive boy--enough of a spark to make an artist fall in love with him and put himself into a painting! I didn't get it. I expected a man so totally absorbed inside himself and his pleasure that nothing around him mattered. What I got instead were corny slow motion flashes of orgies. I expected the torture of the years of greif that haunted him to show in the actors face, and instead, I was given a lot of shots of Barnes trying on different supermodel faces. I just couldn't feel for this character at all.

All in all, I'm giving it 5 stars for being originally from Oscar Wilde, and for showing us some literature on the big screen, but I'm also going to suggest that Mr. Barnes sticks to making the films that don't require deep thought...keep that pretty face free from wrinkles.