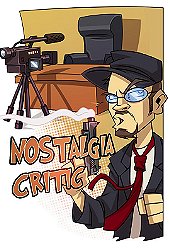 I'm sure many of you will disagree with me, but you're never going to enlighten my sense of humour if you try to correct me. Not everyone likes it. This might lose me some friends...

Overtime, I have watched a few videos from That Guy With The Glasses, and the flaws of the site became more clear to me. I started to lose my sense of humour towards it, and stopped watching it. The Cinema Snob is admittedly the funniest on the site, even if he yells too much nowadays, yet the Nostalgia Critic doesn't really appeal to me anymore because what he's doing has made him lose his voice twice in his internet existence. He also turns his head to the right for absolutely no reason whatsover when he talks. The reviewing style of him and most of the other people on ThatGuy was never intended to be real reviewing, and that's exactly the problem. It's better to waste 20 minutes of your time watching a bad movie including riffs, yet Doug often goes too far and spoils his guilty pleasures. The one positive thing about this is that it differs from his sarcastic review of The Adventures of Sonic the Hedgehog, where he said negative things about the show just so he could get more money. But this is extremely negative because we get spoiled over a movie that might have gotten decent reviews from real critics, such as Conan the Barbarian and Commando. Doug must include a spoiler warning before these kinds of reviews, because he already does it before his Bum Reviews. When he concluded his reviews of Theodore Rex and The Room, he told us to see them when we already saw them in 20 minutes. It's a good thing I deleted my Don Bluth reviews, because I was a huge fanboy until now.

The other flaws about his reviews are the constant uses of running gags, storylines and cameos. Doug himself is sick of the Zuul gag, but not the celebrity phone calls or Chuck Norris. I think Chuck Norris is one of the worst memes on the internet. Storylines and reviews do not mix unless the review has involvement in the story or it isn't forced, and the ending of his review for The Garbage Pail Kids Movie is just audiovisual whining. One of the problems with the Nostalgia Critic's review of The Room was that the cameos of Linkara and Spoony were forced and unnecessary, as if they were being attention whores. The review itself was so flawed that fanboys never noticed and boycotted Tommy Wiseau dressed as the Nostalgia Critic when Wiseau sued Doug over using his footage. There are currently over 500 cameos in the history of Channel Awesome, and it gets old real fast. it doesn't matter if the character has a stiff neck (Film Brain), overreacts (Angry Joe) or whose career is devolving (Spoony). It only matters when it comes to the Distressed Watcher, and he's the downright worst on the site. Except he's not the only one who isn't original.

The Nostalgia Critic seems to unintentionally copy the format of British comedians he doesn't know about like Harry Hill or Charlie Brooker, as well as Film Brain, except he knows about them because he is British. Noah Antweiler has never admitted the influence comic book character Doktor Sleepless has had on his Doctor Insano character, and neither has Doug, because I don't think he knows about the original Bum or the original Ask That Guy. Kickassia also gets worse the second time around, since to this day Doug has never talked about Kick-Ass. Kickassia is also nothing but 90+ minutes of people playing around, making fun of movies, making pointless references to The Simpsons and forcing cameos into their movie, even if they make jokes about them. Also, Doug has sold a DVD of Kickassia, when we can already watch it online for free. It still gives him money, though, since the majority of people on the site use Blip, using a crapload of irritating advertising that we do not want to see and is barely skippable.

You know why I'm one of the only ones out of my friends on Rotten Tomatoes who doesn't hate FernGully? It's because the Nostalgia Critic and Chick did. I never even wanted to watch his review of Waterworld - I just wanted to wait until its next airing on SyFy. I would respect an opinion on TGWTG, but many people seem to overblow it and won't stop making videos about him or involving him in yaoi. I had a YouTube channel called TheWorstMoviesEver (now TheWMEforever), and I copied the style of the Nostalgia Critic at times, but at least I was actually uploading the full movies and not completely reviewing them. Many people seem to copy Channel Awesome these days, and I regret doing so because every review these days has to be fake. It seems that in the future, the only reviews we will ever get will be videos of people playing characters that we should be enforced to trust. The Nostalgia Critic is becoming the next Twilight! Sure, you may think I'm jealous of him, because he has more money and popularity than me, but, honestly. Not to be homophobic, but do I sound like I want a hyperactive fanbase that will treat me as if I'm gay?


Welcome to the future of opinion, my friends. If you want, you can go and hate on me just because I hate these people. Angry Joe did it too.