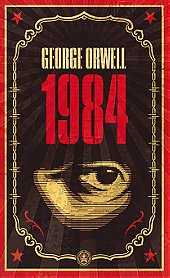 Will certainly be spoilers :)

“If you want a picture of the future, imagine a boot stamping on a human face - forever.”

I'm going back to the classics. My first contact with this book took place about 15 years ago, when this item included in the list of additional readings during my education in high school. I remember that it was for me a period of treatment with the assumptions each book as a necessary evil that someone tells me to read, interpret and even ask more, what color pants had character appears once... I remember "1984" as one of the few books made for me then a huge impression and I would have never thought that I would be a fan of dystopian future issues. So I decided to go back to this story and read it again.

A terrifying vision of a world in which everything is subordinated to the totalitarian rule of the Party, which is headed by Big Brother. Each member of the Party is under surveillance and in general his life and even his thoughts belong to the party and you cann’t oppose it, because the Thought Police waiting… There is also a beautiful concept of ' vaporised ' for those, who still think they are able to outsmart the Party, this word to this day triggers in me strangely unsettling feeling. About this, what is the Party perfectly realizes the main character, which in this sick world, however, has the courage to try to be human.

“Being in a minority, even in a minority of one, did not make you mad. There was truth and there was untruth, and if you clung to the truth even against the whole world, you were not mad.”

Very shocking book. The Party has a way for everything to it government was constant, there are aspects of the falsification of the past, to secure infallibility - quite scary and action (torture in every possible meaning of this word) to destroy humanity and confidence in the infallibility of the Party - cruel and inhumane. No natural impulse, love, or free thought has no sense in the world created by George Orwell. Party straightens every case of insubordination, it will make a man feel like shit, betray everything and everyone, and the Party, before will score you a bullet in the head, make that you leave this world loving Big Brother...
Massacre!

“Under the spreading chestnut tree
I sold you and you sold me...”