The Hobbit: The Battle of the Five Armies review
279 Views
2

Decent finale but it's no Return Of The King. 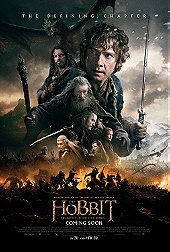 The sad time has now come to bid our farewells to Middle-Earth. It’s been a long wait coming after the series’ pre-production hell before shooting commenced and its two predecessors’ release in 2012 and 2013, but the finale of the 300-page book has arrived. It may have perhaps been too long as Peter Jackson has stretched such a short book into three 2½ hour films to perhaps re-live our experience of Lord Of The Rings. However, The Battle Of The Five Armies is a totally different ball-game to Return Of The King, not just by quality of film and story but where it will leave off. In that respect, Battle Of The Five Armies has arguably had the most weight on its shoulders - to bridge between completing the Hobbit trilogy and introducing Lord Of The Rings. From where the film begins and judging from the title, it had action and excitement written all over it, perhaps being the most potential instalment of the series regarding entertainment only. Now, while The Battle Of The Five Armies was a fitting and satisfying finale but there were moments in the film that became disappointing and wasn’t entirely the masterful climax as anticipated.


Though The Hobbit films have been well-received at the box office, some could argue that it is the reason why the 300-page book has been stretched into three films. However, Jackson stated that more could be explored, including from the appendices, but the issue has been to re-create Lord Of The Rings when, despite being a predecessor and prequel, The Hobbit story is totally different. Anyway, Battle Of The Five Armies kicks off straight after Desolation Of Smaug and we get drawn right into the action. The pacing of the film was better than An Unexpected Journey, at least, but there were still moments in which it still appeared too stretched, such as (SPOILER ALERT) Thorin’s stubborn ‘madness’ and whether to help fight the Orcs. However, this wasn’t entirely a bad thing as it says in the title ‘Battle of the Five Armies’. It promised a lot of action and that’s what we got with great visuals, including Smaug and his fiery wrath on Lake-Town as well as the battle itself. Still, we got enough plots, some of which was a tad muddled and disorientated at times, particularly the Elf-Dwarf romance and Necromancer sequences. Still, The Hobbit book was too large a scale for one film and is perhaps too small for three 2 ½ films (would’ve fitted well at two films running approximately 120 minutes each), but The Battle Of The Five Armies has a slightly faster structure to round off the series.


As expected, it was great to see the ensemble cast return for one last time. Ian McKellen really does gel superbly as Gandalf the Grey and, perhaps more so than in An Unexpected Journey and Desolation Of Smaug, becomes the same one that we first saw in Fellowship Of The Ring. Similarly, Martin Freeman’s role as Bilbo was fantastic. He was literally the perfect actor for the role and in this film, he completes the adventure and thrills that elder Bilbo distinctly discussed in Fellowship Of The Ring. Richard Armitage’s bitter performance as Thorin Oakenshield establishes the anti-hero like critique of the character from the book, which worked well. However, despite all three stars gave great performances in their respective role the only issue was this: there didn’t seem to be one particular protagonist. It seemed like there were too many subplots and it often became uncertain as to who we should focus on more. Lord Of The Rings features separate storylines to achieve the same thing (Frodo, Sam and Gollum + Aragorn, Legolas, Gimli, Gandalf), but the difference is that The Hobbit characters are all together and the narrative centres on the group. That’s where it occasionally stretched the film a bit more. Needless to say, other supporting actors including Luke Evans, Lee Pace, Evangeline Lilly, Orlando Bloom and Benedict Cumberbatch all made solid re-appearances.


Though some may do it anyway, there is really no comparing The Battle Of The Five Armies to Return Of The King. Yes, both end a trilogy in Middle-Earth but the general plot and tonal delivery are both different, not to mention the latter ends it all whereas the formers ends to start a new beginning. It has taken a long time to finish the adaptation of a 300-page book and despite being a tad stretched, The Battle Of The Five Armies is a suitable, enjoyable and convincing enough finale to the trilogy. Peter Jackson, it’s been a wonderful ride for us, the audience, to embark into Middle-Earth with six films for approximately 1031 minutes and its unfortunate to see it go, but it will remain in our memories for eternity.