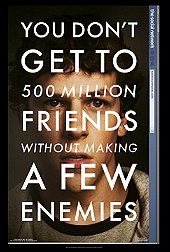 another great direction by david fincher. great characters, surprisingly well performed by young actors. and... that's it. although the first trailer was great, i was expecting something more than what i saw, i was expecting the definition of our society. but it was just another wasted opportunity.

the story is developed as a biography, so there's no focus on a central message. many different characters are brought to the scenes and each contributes almost equally to the movie. that makes it more realistic, but decreases the importance of the story.

so overall it's a story about the life of Mark Zuckerberg, the founder of Facebook. anyone who knows a little about history of information technology will find it a bit repetitive. a simple idea that becomes very successful because no one has implemented it before. it happens a lot, though rarely as successful as Facebook.

there are a lot of little messages along the film, but i'd say four of them are the most important ones. they are represented by the characters Eduardo, Erica, the Winklevoss brothers and Sean. It looks like Eduardo and the dramatic story of friendship betrayal get most of the attention on the screenplay. Mark's passion for Erica could explain all his acts, but that is just lightly insinuated. The Winklevoss brothers bring the message of betrayal too, but less about friendship and more about copyright crime (they are also responsible for the biggest loss of focus in the movie, which i call "the rowing scene", that brings another little message, but not about Mark). And Sean represented my highest expectations about the movie. the few scenes with Sean were great because his message was about our contemporary society and how the technology should be a tool to expand our social concepts. but as i said they were just a few scenes.

so to me The Social Network is not a great movie but has a great direction. the need for a biographical screenplay made them waste an excellent opportunity of coming up with a meaningful story. it seems to me that all the acclamation around the movie is still a result of that first trailer.