Review of Alpha And Omega 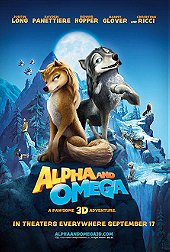 After first hearing about I thought it was nothing interesting and to be honest...I was totallly right.

The plot is unoriginal mostly it uses plot threads from Romeo and Juliet, Balto and The Incredible Journey. Which makes it very predictable thanks to lazy writing which doesn't even try to be different from those film mentioned above.
Another thing is that it's Dennis Hopper's last film before he died from Prostate Cancer. which is very sad to see one of the greatest actor in Hollywood sink so low.
Not Just Hopper but also big names including Justin Long (Dodgeball, Die Hard 4, Herbie Fully Loaded, Going The Distance), Hayden Panettiere (Malcom in the Middle, Heroes, Remember The Titans) and Danny Glover (Lethal Weapon, 2012, Witness, Saw) who starred in a lot better films than this.
The 3D is a total joke, it's so terrible that it makes The Airbender look like How To Train Your Dragon.