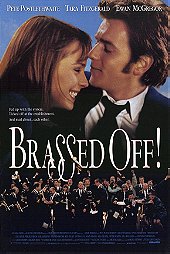 I'm going to disagree entirely with my esteemed friend below. This is not another generic 'ard times' film...God knows Frank McCourt has cornered the market on that.

The 'band' part of the film is not a 'hilarious' result of desperate poverty, but a light hearted parrallel to the grim social realtist portrayal of Thatcher's New Right Britain.

The characters in this film are genuine to the core, Stephen Tompkinson rips you apart with superb acting that cant help but move you to tears. But rather than bog you down with the poverty and mass unemployment that dogged the times, there are frequent moments of comic relief that embody the 'muck on' attitude which every Brit should be proud of.