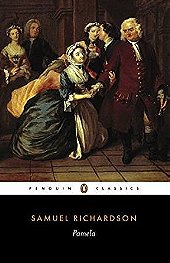 [spoilers and swearing ahead]

'Virtue Rewarded', my arse. It's meant to be a reward when the man who tries repeatedly to touch you up and have his wicked way with you, then kidnaps you and stops you from contacting your relatives, wants you to marry him? During all this, Pamela is 15-16 years of age, and is writing about all this to her parents (whether or not all of it actually gets to them, at times, I know not). Surely if your 15 year old daughter kept telling you that the master of the house had attempted to rape her, you'd go and collect her straight away. Or, when you suspect he has indeed kidnapped her, instead of sending her to London as he has said, alert some sort of authority. Or is it that people in the eighteenth century really just didn't have any sense whatsoever? It's like the storyline from some master-maid hentai.

I found this book way too moralistic, which is common of the time, but more importantly, way too fucking ridiculous for words.